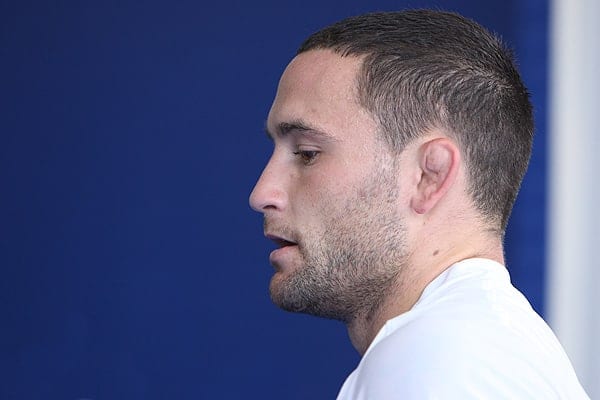 Max Holloway put on the UFC gloves again last night as he faced fellow surging featherweight Charles Oliveira in Saskatoon. ‘Blessed’ didn’t need to do much as a harrowing injury to ‘Do Bronx’ in the first round ended his night swiftly, putting Holloway’s impressive streak up to seven, with all but one coming by way of finish.

The Hawaiian emerged as a serious contender with his UFC Fight Night 74 victory, and his history with interim featherweight champion Conor McGregor adds more intrigue to Holloway’s quest for a title shot. Another legitimate force at 145 pounds is Frankie Edgar and, not playing lip service to Oliveira’s request for a rematch, Holloway wasted no time calling out the former lightweight boss after his win in Canada.

Check out what ‘The Answer’ said to Holloway’s call-out:

I got called out by max holloway and Jeremy Stephens. I will fight either on dec 11 Let’s make it happen @danawhite @lorenzofertitta @ufc

Edgar’s own journey towards his second featherweight title fight has seen the Toms River, New Jersey native take out common opponents with ‘Blessed’ in Cub Swanson and ‘Do Bronx’, and also wins over Urijah Faber and BJ Penn put his unbeaten tally to four.

With McGregor tied up facing Jose Aldo at UFC 189, the most logical and fan-pleasing fight is Edgar vs Holloway, unless anybody feels inclined to see Jeremy Stephens fight ‘The Answer”?

If that were the case, meaningful opponents for ‘Blessed’ in the interim might be tough to find.