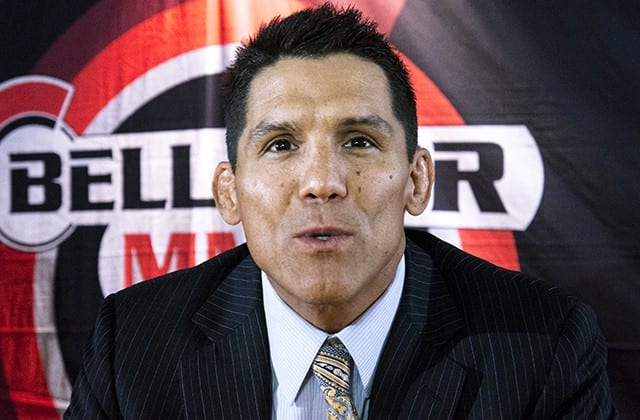 Frank Shamrock hasn’t fought in six and a half years, but he revealed in a recent interview with MMA Junkie that one fight would have changed that.

Shamrock stated that he had a dream one night and that dream was Tito Ortiz beating the hell out of him. It bothered him so much that the next night he dreamed about the fight again, but this time he knocked Ortiz out. Well, with confidence, he went to Bellator MMA officials as well as President Scott Coker with the idea of this fight.

He wanted to turn it into a multiple episodes reality show to hype the fight leading up to the fight at a Bellator MMA event. Ortiz ended up turning down the fight and Shamrock got right out of the gym after learning that.

“It was actually me and Kevin Kay sitting down watching a TV show. I left his office and felt like I needed to do something with MMA. I really wanted to create an MMA TV show that would move the sport forward. I went to bed one night and started having the same dreams again. The first dream was Tito Ortiz beating the hell out of me in a fight. This was just after I watched his last fight. I woke up the night morning and it disturbed me.”

“So I went to bed that night and I my brain solved it by me knocking him in the second-round. So I went those guys and asked them if they wanted to do something crazy, an over the top fight They said yeah and so I laid it out for them. We had multiple shows, everything laid out for this fight. So we could make it a massive thing for this story. So it turns out that I thought he would say yes but it turned out that he said no. So I just moved on.”

When asked about if he would come out of retirement for anyone else, Shamrock wasn’t interested.

“It was just a moment and that moment is now gone. So after Scott Coker called me and told me that Tito said no, I was like well I’m out of the gym now. To me, it was something special in the moment and it passed. For me, I couldn’t see myself getting back in there. I had no desire too.”

Shamrock hasn’t fought since 2009 and lost his last two bouts by TKO.

Ortiz challenges for the Bellator light heavyweight championship this Saturday night against Liam McGeary at Bellator 142.