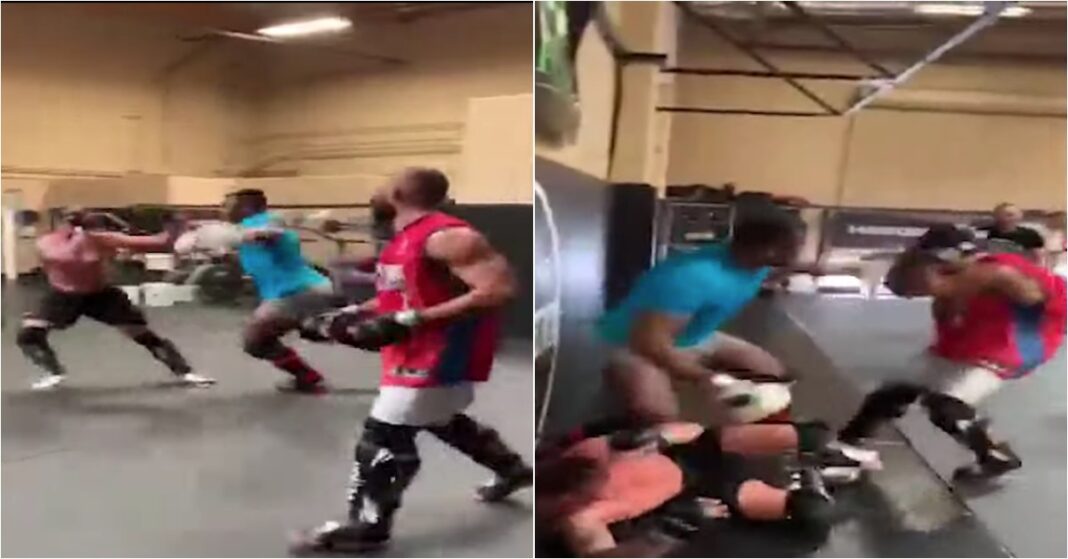 UFC heavyweight champion, Francis Ngannou has taken a rather peculiar approach to his preparation ahead of January’s title unification clash with interim gold holder, Ciryl Gane — appearing to spar two training partners at the same time ahead of his UFC 270 headliner.

Batie native, Ngannou, headlined UFC 260 back in March of this year at the UFC Apex facility — successfully scooping the undisputed heavyweight crown at the second time of trying against former two-time gold holder, Stipe Miocic — avenging his first promotional blemish against the Ohio veteran.

In the time since, Ngannou, who has yet to make another Octagon walk, was linked with a pair of title defenses against former two-time light heavyweight best, Jon Jones, as well as a championship rematch against Derrick Lewis — with neither pairing coming to fruition.

In August, MMA Factory mainstay, Gane, a brief former teammate of Ngannou in Paris, headlined UFC 265 against common-foe, Lewis, stopping the most prolific heavyweight knockout artist in the organization’s history courtesy of a one-sided third round knockout of his own.

In turn, the promotion has since booked a heavyweight title unification bout between Ngannou and Gane — which is slated to take headlining honors at UFC 270 in January at the Honda Center in Anaheim, California.

Ahead of the pairing, Ngannou recently hit the headlines after he drafted current reigning GLORY Kickboxing heavyweight kingpin, Dutch striking sensation, Rico Verhoeven into his camp at Xtreme Couture per his coach, Erick Nicksick in a bid to prepare for the striking style of Gane.

However, in video footage released this week, it appears Ngannou has elected to utilize two training partners at the same time as he gets up to speed for his start-of-year showdown with Fernand Lopez product, Gane.

Tensions between Ngannou, Gane, and the latter’s head coach, Lopez appear to still be high after footage emerged of the Cameroonian appearing to blank and ignore his former coach and brief training partner backstage during his walk through the corridors at UFC 268 earlier this month.

Ngannou would later reveal that if Gane was by himself backstage at Madison Square Garden he likely would have spoken to the undefeated kickboxer, however, has claimed that Lopez — who he believes has made disparaging comments about him in the past would misconstrue any sort of interaction.