LowKickMMA.com
Home Bellator News Fedor vs. Sonnen Peaks At Over One Million Viewers 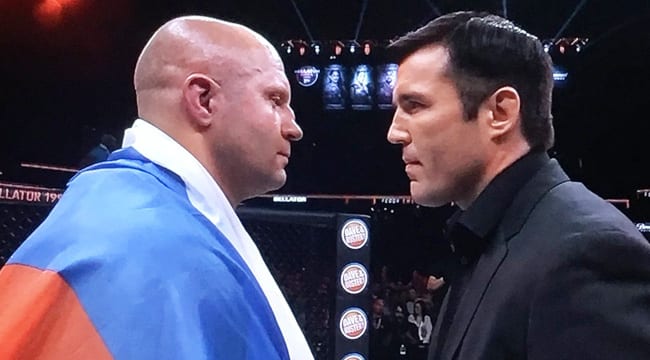 The Heavyweight Grand Prix semifinal bout between Fedor Emelianenko and Chael Sonnen (highlights) at Bellator 208 last Saturday night (Oct. 13, 2018) was entertaining for as long as it lasted.

Fans tuned as they often do when “The Last Emperor” fights as a result. According to MMA Fighting’s Dave Meltzer, they did so to the tune of 802,000 viewers for the course of the main event, peaking with 1,090,000 when including DVR viewership added in through Tuesday night.

In total, Bellator 208 averaged 521,000 viewers live. The event netted another 83,000 viewers over the next three days courtesy of DVR viewership.

DVR viewership was expected to be higher than normal levels as Bellator 208 faced Saturday night competition from college football, the MLB baseball playoffs, and the Terence Crawford vs. Jose Benavidez boxing fight on ESPN, which was the highest-rated boxing match aired on cable television this year.

In comparison, Bellator 207 one day before at the Mohegan Sun Arena in Uncasville, Connecticut, averaged an underwhelming 493,000 viewers. That includes DVR viewership over the next few days. However, the Bader vs. Mitrione fight averaged 620,000 viewers including DVR viewership with a peak of 798,000.

It’s important to point out that these numbers only reflect viewership from Paramount Network because DAZN does not report streaming numbers.

Bellator officials stated that 3.9 million people watched at least one minute of their programming between the two shows on Paramount. It’s tough to say just what that means for overall viewership quantifying.