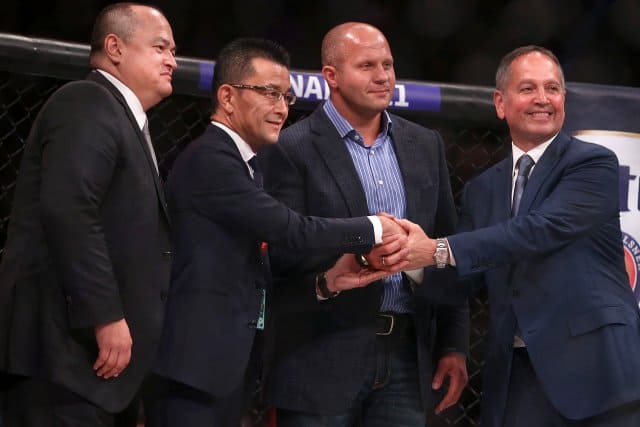 When the news broke that Fedor Emelianenko would be returning from his retirement it instantly led to weeks of speculation among the mixed martial arts community. Rumours of dealings with the UFC began to spread across the web, with Emelianenko and his management teasing on social media and in interviews, but all the while holding the cards close to their chest.

The we learned that ex-Pride FC owner Nobuyuki Sakakibara was pairing up with Bellator MMA to host Fedor’s comeback, later confirmed for New Year’s Even in Japan. Cue the deflated balloons. That said, let’s get the good stuff out the way first, because there are many positives to take from this situation.

For starters we won’t have to pay to watch the former Pride FC heavyweight champion fight again, whereas had he joined the UFC we’d be digging in to our wallets for a $60 tax on watching the Russian legend’s comeback. There’s also the fact he’ll be fighting in Japan again, where he made his name as the most elite heavyweight during the illustrious 10 year reign.

Also you have to consider the impact this will have on Japanese MMA, which has been a dead zone since Pride went bust back in the day. Hey, maybe this doesn’t fully close the door on the UFC either, perhaps a few big wins will make Fedor worth that big buck that Zuffa is so often slow to offer. $2.5 million is a big gamble to take for any promotion on a fighter that’s been out of action for so long, and just the thought of Fedor falling flat against the current UFC heavyweights may have been enough to scare them off of signing Fedor. That’s if the UFC ever showed any interest at all.

So what if ‘The Last Emperor’ blasts the competition with ease in Japan? It’s likely we may go full circle and see the UFC once again bargaining for an appearance from the great Fedor, but then there’s also the competition outside the UFC to consider. Of course Bellator heavyweight champion Vitali Minakov could provide an exciting match, perhaps even Cheick Kongo, but let’s be honest, no one poses anywhere near the level of elite threat as the UFC, whether you like that fact or not.

So before we go in to the section of this article that picks apart Fedor’s signing with Bellator, check out this video of a striking session with ‘The Last Emperor’:

OK, so maybe he didn’t steal Christmas, but you get the point. Fedor Emelianenko joining Bellator took the jam out of a whole bunch of doughnuts, especially when the reality of his remaining longevity is considered. Talk of his form being better than his Pride years also elevated hopes of him joining the UFC, but Fedor’s mystery didn’t die with the first part of his career.

Perhaps, we thought, the disappointing twilight of Emelianenko’s first fighting stint could be somewhat erased by finally testing his mettle against the best of the best in the modern MMA era. Fights against Satoshi Ishii, Jeff Monson and the ghost of Pedro Rizzo all proved to be little more than a quiet chapter in the book of Fedor, and that’s the last thing we want to see in the index of that story.

Undoubtedly the hefty pay day of $2.5 million plays a big role in his comeback from retirement, but if we’ve learned one thing about fighting, it’s that money is often the worst motivator for stepping in to the arena of combat. You only need to look at Fedor’s obviously out of shape physique during his last six fights to know that he was clearly unmotivated, that said he has been looking incredibly ripped and bigger in recent photos.

If it’s money he is fighting for, he will have it, but at what cost? The potential options for his first opponent in three years are limited, but there are still viable options. As narrow as that passage might be, Emelianenko could indeed come out the other side smelling of roses. The sad thing is the whole bunch of rematches of all his unavenged losses are now unavailable, and that stings a little.

While the rumours were busy making their way around the globe, a certain pool of names stood out among a full roster of potential UFC debut fight; Fabricio Werdum, Bigfoot Silva and Dan Henderson. All scored gnarly stoppage finishes over Fedor in the dying embers of his glittering career, and any fan of the ex-Pride boss would tell you they were the hardest fights to watch of that era. Win or lose, people wanted to see those rematches.

Then you have the fighters that Fedor beat, and there are enough of those still active in the UFC to make a legitimate case. Mirko Cro Cop, Andrei Arlovski, Mark Hunt and, at the time, Antonio Rodrigo Nogueira was still active. So there we have seven awesome fights that would have sold more PPV’s than the GDP of China, or near it at least.

Perhaps the UFC did turn down the option of signing Fedor Emelianenko and, if they did, missed out on the biggest opportunity to put on a main card that would easily squash the UFC 100 records. Maybe the Reebok deal led Fedor away from the UFC bargaining table, whatever the case, his joining Bellator has left many fans wondering what the immediate future holds for the always elusive and mysterious ‘Last Emperor’.

At the very least, we’ll have answers very soon.