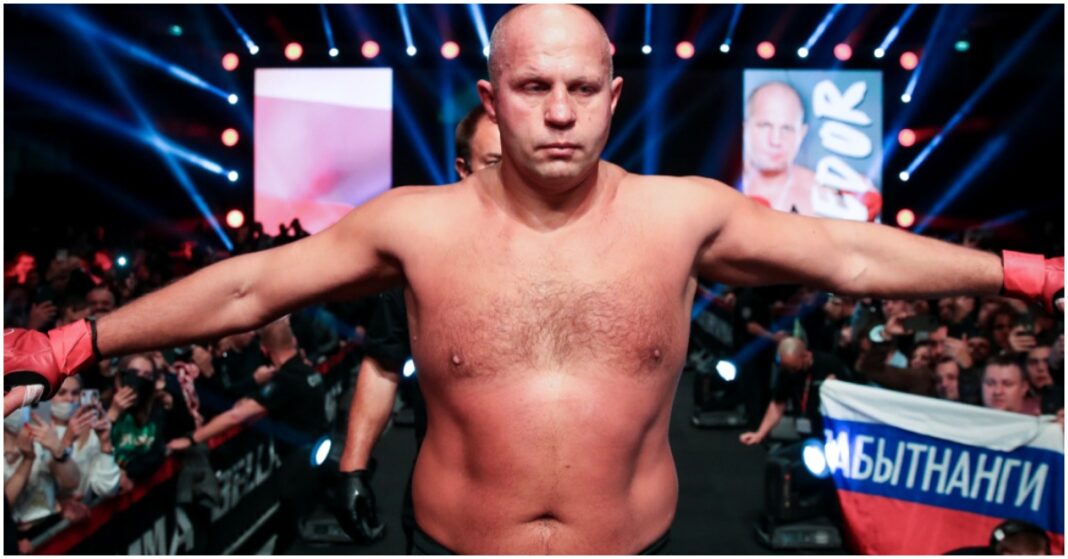 Fedor Emelianenko is set to have one more fight and if everything goes to plan it will headline a “massive” Bellator event in Moscow, Russia.

‘The Last Emperor’ rolled back the years at Bellator 269 where he landed a three-punch combination to spectacularly knockout Tim Johnson.

Post-fight, many speculated that Emelianenko may ride off into the sunset and retire on the back of his most impressive win in recent memory. However, ahead of Bellator 271, Scott Coker revealed that will not happen and that he has something big planned for the heavyweight legends’ retirement fight.

“I think that we’re planning something really, you know, large-scale event in Russia for him as his farewell, sending off as far as having this illustrious career being the greatest heavyweight of all time,” Coker told MMA Junkie.

READ MORE:  Fedor Emelianenko Open To Boxing Match With Roy Jones Jr.: 'It Would Be An Honor For Me'

The Bellator president couldn’t hide his excitement when talking about Fedor’s most recent with over Johnson.

“It was really amazing to see at 45 him still, you know, throw a three-punch combination like that, like he was 25 years old,” Coker said. “It was unbelievable, and the place, when it erupted, it was just like this ‘Rocky’ ending to the storybook, right? And we’re going to have one more. It’s going to be massive. It’ll probably be next summer.”

READ MORE:  Fedor Emelianenko Open To Boxing Match With Roy Jones Jr.: 'It Would Be An Honor For Me'

Who do you want to see Fedor Emelianenko face in his final fight?

Fedor Emelianenko Open To Boxing Match With Roy Jones Jr.: ‘It Would Be An Honor For Me’