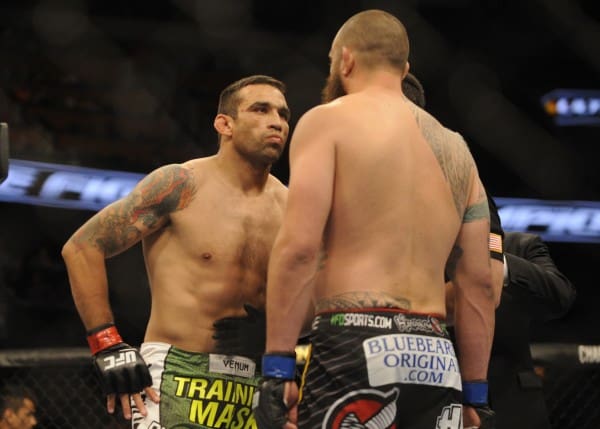 Earning his shot with a thoroughly dominant victory over Travis Browne at April’s UFC on FOX 11, Werdum isn’t going to let that disappointment sway his view of the pay-per-view (PPV) event, which will still be the first-ever UFC event on Mexican soil.

Speaking with FOX Sports Werdum recently chose to focus on the positive side of UFC 180:

“I’m definitely a little disappointed and this will take a little bit from the fight, because Cain has such a big following there and support. It’s disappointing Cain won’t be there, but it’s still a historic, great event.”

Werdum will now face off with Samoan knockout artist Mark Hunt for the interim title. Hunt is currently attempting to cut down to the heavyweight division’s 265-pound weight limit from over 300 pounds, and Mexico City has a high altitude that could seriously affect Hunt’s conditioning.

Werdum has lived in Mexico for around two months, and although he and his training camp nearly died from carbon monoxide poisoning, “Vai Cavalo” believes his time spent there will give him a big leg up on “The Super Samoan”:

Known for perhaps the most jaw-shattering knockout power in the UFC, Hunt comes in off of a walk-off knockout of the notoriously iron-chinned Roy Nelson at UFC Fight Night 52 on September 20. But even with that win, Hunt only has a 1-1-1 record in his last three fights after a draw against “Bigfoot” Silva and a highlight knockout loss at the hands of Junior dos Santos.

Werdum, on the other hand, has won four straight over Nelson, Mike Russow, Antonio Rodrigo Nogueira, and Browne to earn his shot. He’s undoubtedly at the height of his overall fighting skills after adding a world-class Muay Thai game to his already legendary Brazilian jiu-jitsu pedigree.

Signs point to a Werdum victory for the interim strap, something that he’s already envisioned:

But even if Werdum has the advantage in terms of wrestling, submissions, conditioning, and perhaps even technical striking, Hunt has the equalizer in his thunderous knockout power.

Which skillset will win the temporary title at UFC 180?