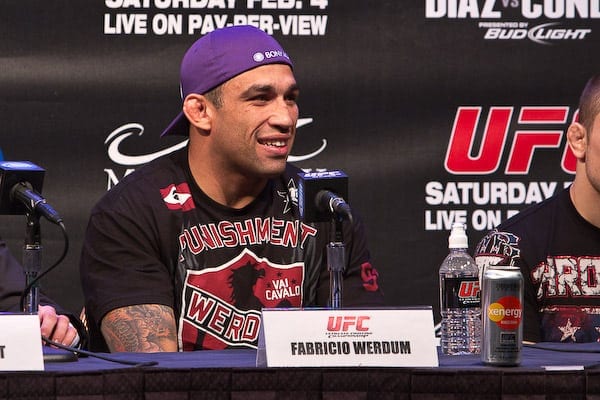 UFC light heavyweight champion Jon Jones has long been rumored for a super fight with former middleweight champion Anderson Silva, but with their careers headed in different directions, talk of the dream bout has cooled off considerably in recent months.

The two met up at the UFC’s headquarters Las Vegas earlier this week to do some light sparring, but Jones said he has some other super fights on his mind. “Bones” spoke up at Monday’s “The Time Is Now” press conference to state his belief that he could beat newly crowned UFC interim heavyweight champion Fabricio Werdum:

“There are definitely a lot of heavyweights that I know I would beat. A lot of heavyweights that could give me a hell of a run or possibly beat me. I keep it real. I’m smaller than these guys. A guy like Werdum, I would fight him every day, all day. Why? Because he’s not the biggest guy. But the heavyweights I believe would give me the hardest time are the big ones. Not necessarily the better skilled ones — just the bigger ones. You shoot in and they sprawl out on you, that’s going to take a lot of energy to finish that shot, you know what I mean?”

Apparently Werdum got wind of Jones’ statement, and he quickly accepted the champ’s challenge in an interview with Globo (translated by Bloody Elbow):

“I don’t know why didn’t he said that before I become a champion. He said it now but I would fight him for sure without any problem. He has to go up or make it a catchweight bout. But my biggest goal is to fight Cain Velasquez [undisputed champion] to unify the belts. Dana White even spoke to the media it is going to happen in June. It has even a schedule and he would like this fight to happen in Mexico, so no way we will do it.”

Werdum has a good point, as he is focused on his previously scheduled match-up with undisputed champ Cain Velasquez, which is tentatively slated for a June card in Mexico City. It’s a huge bout that Werdum can simply not pass up, making a fight with Jones very unlikely at this point.

Ever the joker, Werdum made light of Jones’ words, noting that if he wants to fight him everyday, he can make a trip to King’s MMA to train with Rafael Cordeiro and his team:

“He (Jones) said it just to say, I don’t know why he did it, but he also stated he would fight me every day, so he means that he wants to train with me. To fight everyday he has to train, right? The academy is over at Kings MMA, where we train hard everyday. If he wants to pay us a visit or train with us and is ashamed of saying it, that’s fine. Welcome, when he wants, we are in Huntington Beach, at Kings MMA. He can train with us everyday (laughs).”

Werdum may be willing to fight Jones, but he has his eyes on the biggest prize in UFC. Until his rivalry with Velasquez is settled, Jones will have to wait to face “Vai Cavalo.”

That’s just fine, because “Bones” still has to defeat Daniel Cormier in the main event of January 3’s UFC 183, and if he does, his long-awaited rematch with Alexander Gustafsson will loom.

But if he gets past both of those challenges, would he be able to beat a smaller heavyweight like Werdum, or would the change in class finally put Jones at a disadvantage?