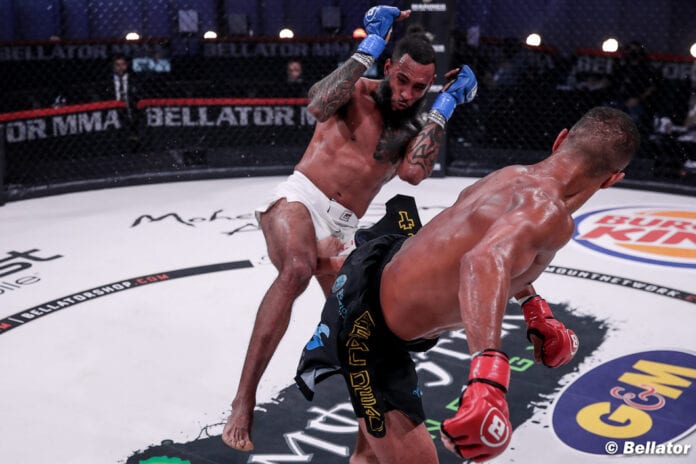 As we all know by now, standout kickboxer Raymond Daniels didn’t get the highlight-reel knockout he was looking for at Bellator 245.

What he got was a no contest instead. He did however manage to get everyone’s attention with it, as he landed two spinning back kicks to Peter Stanonik’s groin.

Daniels won round one handily, and landed numerous spinning kicks in that round as well, but he landed two of them in a very short period of time in round two, and Stanonik couldn’t continue.

Daniels was interviewed by Jordan Ellis of LowKickMMA following the fight to talk about his thoughts on it, as well as what he wants next. He was first asked if he felt he was on his way to winning the fight after an impressive round one:

“Yeah yeah definitely, I mean, as far as where the fight ended, I felt like he didn’t have any more juice or any more energy as far as cardio-wise. You know I was fully recovered after the first round, and I felt really good.

“And I know people can say kinda what they want, but when you’re a fighter, and you’re in there with the other fighter, you understand if that fighter has kinda like blown their load already so to speak, they’re already kinda like a little gassed.

“I felt like he was pretty gassed after that first round. I mean he landed a couple clean shots, he hit me once on the ground after I slipped then he mounted me.

“And then I think he hit me with two good shots standing up, a few leg kicks, but all-in-all I think I was dominating the fight as far as I was hitting him with cleaner, more precise strikes. He maybe hit me with what, a handful of strikes total throughout the entire first round?

“You know, he does pack a good punch when he’s swinging, you know he’s coming with his heart and his soul behind his techniques so to speak.

“But that’s why I was looking forward to fighting him, because I know he’s a guy that bites down on his mouthguard and he wants to come in, he’s ready to party. You know what I mean? So those are my favorite type of guys to fight because they come with a lot of heart.”

Daniels was then asked what he wants next, whether he wanted to rematch Stanonik or move on and fight a new opponent entirely:

“For me, I’m open to different things. The whole MMA side, I think he was a great fighter for me to fight because he is a stand up fighter. You know, he does have I guess it’d be two more times the MMA (experience) I have. I had a total of three fights, he had a total of nine MMA fights.

“So that was kinda like the goal also, for me to try and go out and try some different wrestling things, because again I’m trying to become an all-around MMA fighter. I’m already a world champion kickboxer, I would like the be the world champion in mixed martial arts.

“Therefore I need to be able to put myself in different situations. So for me, I was able to show some people some of my ground work, they’re like, ‘oh man, he’s in the worst position he could possibly be in, he’s fully mounted’, and I was able to come (get) up very smooth.

Regardless of where he goes from here, we’ll surely be tuning in. He’s one of the most entertaining fighters in combat sports.

He has a 35-3 professional kickboxing record, as well as having the Bellator Kickboxing Welterweight Championship and numerous world championships in karate tournaments. Daniels is one of the most well rounded strikers on the entire planet.

Who would you like to see Raymond Daniels face next?