Everyone in MMA knows and loves the Michael Bisping story. ‘The Count’ was the nearly man at middleweight for much of his career until he made a late run for the title and knocked out his biggest rival, Luke Rockhold, to claim UFC gold.

What’s most amazing about Bisping is he managed to become UFC champion with just one eye. ‘The Count’ had lost vision in his right eye after fighting Vitor Belfort in 2013. Despite that, Bisping went on to pick up some of the biggest wins of his career on his way to claiming the UFC middleweight title and ultimately retiring in 2018.

After walking away from the sport and launching a successful career for himself in media, Bisping has decided to tell his whole story in the form of a documentary aptly titled – The Michael Bisping Story.

Ahead of the film’s March 22 release, Bisping spoke with LowKickMMA about the long process that has ultimately led to this moment, he said.

“We started filming in 2018 and now here we are, it’s about to be released,” Bisping said. “So, I’m very excited for the world to see it. There’s a lot of work that’s gone into this, a lot of time and effort, a lot of editing, a lot of people kindly gave up their time. You know, we had some great people giving up their time and speaking – Dana White, Joe Rogan, Vin Diesel, Mickey Rourke. You know, tons of great fighters, Georges St-Pierre, etc. Yeah, I’m very happy with the finished product.”

While Bisping is happy with the finished product the British fight legend admits that filming was at times tough to do as he had to relive some of the darker moments of his life.

“It was hard at many times,” Bisping said of the filming process. “I mean because the director was asking a lot of personal questions about my childhood and things like that. About motivation and some of the darkest days. You know, because there was plenty of dark days like when I started with the issues with my eyeball. I was forced to sit on the couch for a year and I thought my career was over.

“But also, at the same time, it is fun to sit around and talk about how great you are,” Bisping added with a chuckle. “I’m just kidding! It’s always nice to revisit those big moments but the darker moments, that’s a challenge. That’s the thing, this documentary is very much warts and all. It focuses on a lot of the losses; how hard it is to rebound from a loss. You know, some of the guest speakers like Michael Jai White say some poignant words. So, yeah, it was mixed emotions.”

Will you be watching The Michael Bisping Story when it drops on March 22? 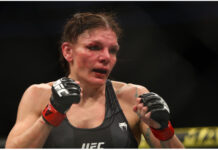 Report | Lauren Murphy Out Of UFC 276 Fight vs. Miesha Tate 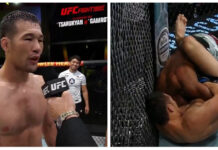 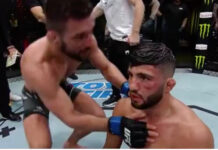