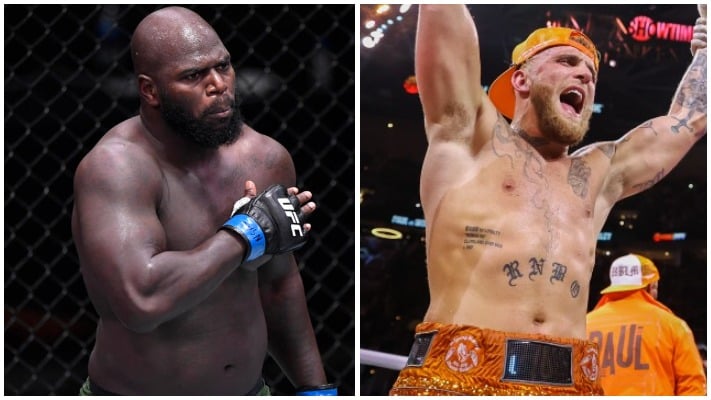 Jairzinho Rozenstruik doesn’t want to hear anybody dismissing Jake Paul as a fighter after his big win over Tyron Woodley this past weekend.

The YouTube star transitioned to professional boxing in 2020 and has looked impressive against low-level opponents. Paul held wins over a fellow internet celebrity, a retired NBA player, and Ben Askren before he stepped in with Woodley on Sunday evening.

Paul survived some tough moments to walk away with a deserved split decision win over ‘The Chosen One’ who has been demanding a rematch over the last few days.

In a recent interview with LowKickMMA, Rozenstruik had nothing but good things to say about Paul who impressed him by beating one of the best UFC welterweights of all time.

“I think he (Tyron Woodley) got Jake Paul and he didn’t finish the job,” Rozenstruik said when asked to review Woodley’s boxing debut. “That’s the only thing I can say. And, for Jake Paul, he was really active in the earlier rounds. So yeah, he got that win. You can’t say too much about it. He has a big mouth, but he backed it up, he won the fight.”

“Of course. I think he (Jake Paul) is a fighter. He beat a five-time champion. Come on. Don’t say too much, the guy beat the guy,” Rozenstruik said. “The guy beat Woodley. Tyron Woodley is known for (being) one of the strongest punchers in the welterweight division. What do you want to say? He beat him.”

“He’s training and everybody can be a fighter if you train,” Rozenstruik added. “People say, ‘yeah, he’s a YouTuber, he’s this, he’s that.’ If he trained, he can be a YouTuber and a fighter and that’s what he does, so, I’m okay with it.”

Rozenstruik says he is considering following Woodley into the professional boxing world but only once he’s achieved his goal of becoming a UFC champion.

“I did kickboxing for so many years, now I’m in the MMA game and I think boxing is the only thing that I didn’t do. So maybe later,” Rozenstruik said. “I want to get the UFC gold and then we’re going to see from there. That’s the only thing that’s in front of me right now and we’re going to see the future. I’m only 33 years old and you know, it’s bright, it’s there and I’m happy that I’m in the position to be on this big promotion in life right now.”

Do you agree with Jairzinho Rozenstruik? Should Jake Paul be getting more credit for his win over Tyron Woodley?