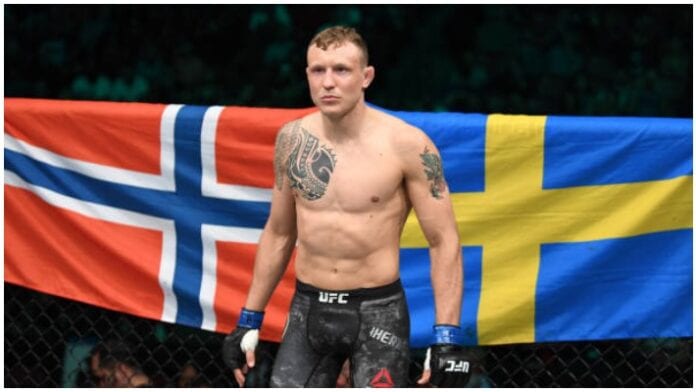 Jack Hermansson believes he will score a third-round stoppage win when he squares off against former middleweight title challenger Kelvin Gastelum in the UFC Fight Night 172 co-main event on July 18.

Hermansson is looking to bounce back from a tough loss against Jared Cannonier last time out at UFC Copenhagen. ‘The Joker’ started well in the September 2019 bout but things went south in round two. He was caught with a beautiful uppercut that sent him tumbling to the floor. ‘The Killa Gorilla’ lived up to his nickname by seizing the moment and finishing the fight.

After being linked with a fight against former 185lb champion, Chris Weidman the European standout out was eventually matched against TUF winner Gastelum who is coming off back-to-back losses to Israel Adesanya and Darren Till.

Speaking exclusively to LowKickMMA Hermansson revealed his long-held admiration for his July 18 opponent, he said.

“I think he’s a great opponent and I have been following him for years. I watched that season of the Ultimate Fighter that he won. He’s a great fighter and as you mentioned the Adesanya fight. When he is on his best he is really, really good and that’s the guy I’m thinking I will face on ‘Fight Island’.

The 32-year-old believes fighting such a dangerous opponent will bring out the best in him, he said.

“I need to be on my best as well to be able to beat him. Knowing that he is so good is going to sharpen me (and) bring the best out of me as well. I believe that I really need to do those adjustments from the last fight, be unpredictable and use all of my tools to win the fight – I think that is key.”

While Hermansson would prefer an easy night’s work against Gastelum, he understands that is unlikely. Nonetheless, the Sweedish fighter predicts he will get the finish on July 18 in the third and final round.

“I would prefer an early finish but when I see it happen, I’m seeing a long, grueling fight. Three rounds and me finishing the fight at the end of the third round,” Hermansson said.

Do you think Jack Hermansson will stop Kelvin Gastelum on July 18?