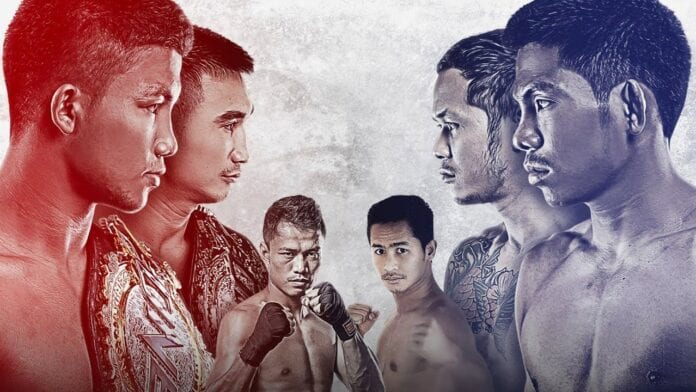 ONE Championship returns this week with ONE: No Surrender going down in Bangkok, Thailand, on Friday, July 31. The six-bout card features three cracking Thai vs. Thai ONE Super Series contests that will be must-see for fans of high level striking.

In the main-event ONE Flyweight Muay Thai Champion Rodtang Jitmuangnon defends his belt against Petchdam Petchyindee Academy. This fight will be the third time these two have met with each man holding a win apiece. In the co-main event, Petchmorakot Petchyindee Academy will put his ONE Featherweight Muay Thai Championship on the line against one of the veterans of the sport in Yodsanklai IWE Fairtex.

The third bout that should get the pulses racing is a trilogy contest, fought under kickboxing rules between former Glory lightweight champion Sitthichai Sitsongpeenong and two-division Lumpinee Stadium champion Superlek Kiatmoo9, both of whom will be making their promotional debuts.

An incredible fight! A really tough one. Rodtang is a real tank. Petchdam is a difficult opponent. He is really skilled and left-handed. I know they are 1-1 in their previous fights, but this time I would go for Rodtang.

It’s now the third time they are fighting each other. This fight is like the final decision of who the better fighter is. They have both knockout power, and they know each other from the last two fights. I’m curious what kind of outfit Petchdam wears during his entrance. About the fight, I think that Rodtang comes forward like a tank. Like he always does. And I think Petchdam is going to counter-attack more. Southpaw against an orthodox fighter is always a good fight.

I might give this to Rodtang. He’s so good at applying pressure to close the distance and unleash his hands, mixing it up to the body and head really well. Especially since this will be a Muay Thai fight with MMA gloves, I think the power and damage might overcome Petchdam ( as much I love Petchdam and his powerful kicks)

Another terrific fight! Two of the best in class and both incredible left-handed strikers. I would go for Yodsanklai [MMA gloves] will help his incredible power.

Two aggressive southpaw fighters. They are both coming in to hurt you. Yodsanklai has lost his last two fights, so I hope he is going to show the world he still has the fire inside him. Petchmorakot is a very good fighter. I think, personally, he has a strange aura if he is fighting. You can’t see if he is in pain or if he doesn’t like pressure. It’s like he enjoys it and comes back even harder. So I think we are going to see an aggressive fight immediately from round one.

Yodsanklai definitely has power, but I think Petchmorakot has reach on this one. And his specialty is knees and elbows and clinching. Since it is a Muay Thai match and clinching is allowed, if Petchmorakot can keep him away utilizing his range and knees and dictate when to get into clinching range, I think he will be able to do some damage with those knees and elbows in the clinching range to come out on top. He just needs to be able to dictate that range himself.

It’s like a daydreaming fight for kickboxing fans! I know they are 1-1, and this will be their third showdown. If Sittichai has studied his opponent and is physically in good shape, I would definitely go for him, but that is just my forecast.

Holy crap, this is a toss-up for me. They have had such a close match before in kickboxing, and before that, Sittichai KO’d Superbon with a vicious hook. Both are so well rounded and can mix all weapons seamlessly, and both have been competing at a high level internationally. This will be a back and forth battle, and I’m glad I won’t be the one judging it, but it will definitely be a treat to watch.