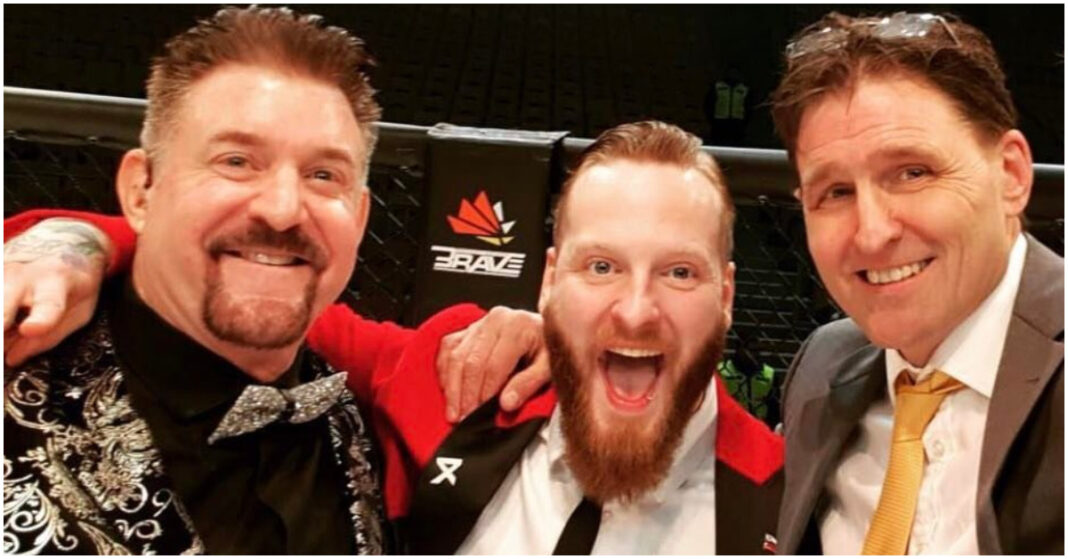 BRAVE CF wraps up its 2021 calendar this Sat, December 18, with BRAVE CF 56 going down in Belgrade, Serbia, inside the BelExpo Centar. Headlining the nine-fight card will be a lightweight clash between the Philippines’ Rolando Dy and hometown hero Slobodan Maksimović.

Ahead of this weekend’s event, LowkickMMA caught up with the three of BRAVE CF’s most recognizable voices: Commentators Phil Cambell and Kirik Jenness, as well the “The Roaring Lion” himself, BRAVE CF’s in-ring announcer Carlos Kremer.  Cambell, Jenness, and Kremer have all had front-row seats to the action and drama that has unfolded at BRAVE CF throughout 2021. We asked them to share with us their favorite moment of the Year, Fight of the Year, and the match-ups they most wanted to see in 2022. Here are the moments that resonated most with them in 2021.

Favorite Moment of the Year

The favorite moment of the Year isn’t just one singular moment caught in time. It has to be the return to Kombat kingdom four shows over the course of 21 days, and [in] one of the most beautiful settings Arad Fort in Bahrain. You could just feel that there was so much history steeped in this place. It was like a Roman Coliseum times 10. Such an amazing backdrop, four incredible shows stacked with incredible fighters. You know, you had some of the best fighters in the world coming together in that moment.

I announced Ahmed’s fight against Richie Martinez five plus years ago at Brave CF 1, and he shocked the world then with a victory over “The Boogieman” , who is one of the top Jiu Jitsu stars on the planet. Six full years of dedication, Amir left his home and family in Egypt to train under the guidance of His Highness Shaikh Khaled Bin Hamad Al Khalifa and the No.1 team in the world, KHK Team Bahrain, and proved to all of us and millions of Egyptians that you can become a World Champion with Brave CF if you want it bad enough that it consumes you.

I’m so happy for him and the team—what a way to end another historic year for us.

We opened in Russia, then saw an extraordinary four cards on successive weekends in Kombat Kingdom capped with the ecstatically great BRAVE 50, before pouring into Belarus, Italy, Kazakhstan, Poland, then back to Russia, and before the year is out Serbia. 2021 will end with BRAVE visiting 25 countries across five continents, well ahead of any other promotion on Earth ever in the same span.

Inspired by Shaikh Khalid and led by Mohammed “The Hawk” Shahid, the BRAVE team, I should say the BRAVE family, we charged across the globe, grinding every minute of every hour of every day.

That’s my favorite moment – the grind – and that moment, it lasted all year long.

What was your Favorite BRAVE CF moment of 2021?