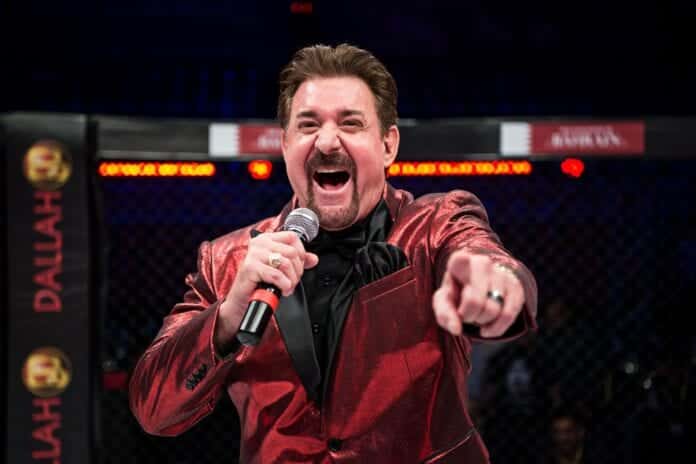 BRAVE CF touches down in Minsk, Belarus, this Friday (June 4) for BRAVE CF 51. The Eastern European country will be the 22nd nation BRAVE CF has staged an event in, an impressive figure considering the promotion only launched five years ago.

Carlos “The Roaring Lion” Kremer, the promotions indefatigable cage announcer, has been with the company since the start, holding court for every event from the moment Atif Mohammad and Sunny Khatri walked into the cage for the opening bout of BRAVE CF 1.

LowkickMMA caught up with Kremer recently to discuss his start in MMA and how he ended up working with the Middle East’s premier MMA promotion. MMA is a tough industry to break into regardless of what side of the cage you want to be on, and Kremer’s story is a testament to the importance of creating opportunities rather than waiting for them to appear.

” I was living in San Diego and was hungry to get involved in mixed martial arts. I started doing interviews at different MMA functions in Ventura and Los Angeles, and just bidding my time and doing it for free, and [ it was my] passion,” Kremer said, speaking to LowkickMMA

The former marine captain began working for the San Diego promotion Epic Fighting, run by Jason Stewart. Kremer’s love of MMA and drive to establish himself in the industry saw him dip into his own pockets to hire camera operators and an editor to start EpicTv.

“You have to think big picture, and the marketing alone from those early days came back to me tenfold,” Kremer explained.

To those outside looking in, it was a risky move, but it was one that has since paid dividends in ways Kremer could never have foreseen at the time. After being offered an opportunity to be Epic Fighting’s cage announcer, his career trajectory was set on a course that would lead him to BRAVE CF.

“Once I hit that cage, you know I have always loved drama, I’ve been in plays, I’ve been an actor in Hollywood, and I wanted to bring that broadway show style feel, like a major Hollywood, Bollywood production into the cage of mixed martial arts. And give the fans an experience they would never forget,” he said.

Kremer’s busy schedule also included hosting a podcast, and it was when he had Manolo Hernandez and Alex Soto on as guests that the next chapter of his career began taking shape. Hernandez was matchmaking for the BRAVE CF and mentioned to Kremer’s wife, Teca, that the promotion was still in the process of deciding who would be their cage announcer. She immediately recommended her husband, footage made its way to Bahrain, and the rest is history.

” I started with BRAVE CF 1. The Kingdom of Bahrain has taken me in like family, one of their own, ” Kremer said,

” It’s been a whirlwind, and it’s just been an unbelievable journey. “

Cage announcer positions are sought-after roles regardless of the market a promoter is operating in. The choice of Kremer to be the announcer for BRAVE CF, a Bahrain-based company, did not pass without a few obstacles, especially given the fact that, at the time, he was an unknown figure in the Middle East.

” There are so many Arabic speaking celebrities, announcers, so many quality amazing individuals that they[BRAVE CF] were pressured to put someone like that on their show, and rightfully so,” Kremer said.

“But they had the belief in me and said, ‘wait, just watch, listen, see this guy in the cage. See how the fighters relate to him,’ and sure enough, it happened.

” I am very grateful because there were so many other people deserving in the area, so I had to come through with the biggest, most grand extraordinary performance, night after night, to not only secure my job but to make history together.”

“The Roaring Lion” is not the only one at BRAVE CF leaving everything inside the cage. The company has created a platform for fighters from regions other promotions have often overlooked. Kremer believes that for the athletes, knowing the company that they compete for has complete faith in their talents results in even better performances from the fighters.

” I’ll tell you what when you watch BRAVE and you watch our fighters because his High Highness [ BRAVE’s founder Sheikh Khalid Bin Hamad Al Khalifa]believes in them and Mohammed Shahid [BRAVE’s president] believes in them, these guys fight like no one else in the world.

“In my opinion we have the best fighters in the world. Our warriors fight like no other because we are an organization of fighters that take care of our own and when His Highness and Shahid believe in them and support their dreams they will leave it all in the cage with a ferocity and focus you have to see for yourself.”

Kremer adds that it is not just the fighters that BRAVE CF forms a bond with, but also the countries they visit.

“What Brave Combat Federation does is form relationships with countries, not for one event but forever. We want to help their economy, we want to help their businesses. We want their fans and their people to take pride in what’s happening and that we include them on this incredible mission.”

He references a moment from BRAVE CF’s early days that left a lasting impact on him to highlight his point. The promotion had just wrapped up its inaugural show, and Shahid was fielding questions from the assembled media. Reporters began asking what would happen if BRAVE CF did not become as financially successfully as the company hoped it would. Shahid’s reply, Kremer says cut straight to the core of the values that BRAVE CF represent.

” [He said] ‘We don’t care about any of that. We are here to create a global imprint on MMA for the entire world to see.’ It’s like how can you compete against someone who said that ?’

Since BRAVE CF 1, Kremer’s career has gone from strength to strength — he has won FightBook MMA’s No.1 Cage Announcer in the World award now four years running—his success mirroring that of the company he calls home. However, there are still many fights to announced and events to be held, but Kremer, like BRAVE CF, looks set to leave a lasting legacy on the MMA landscape.