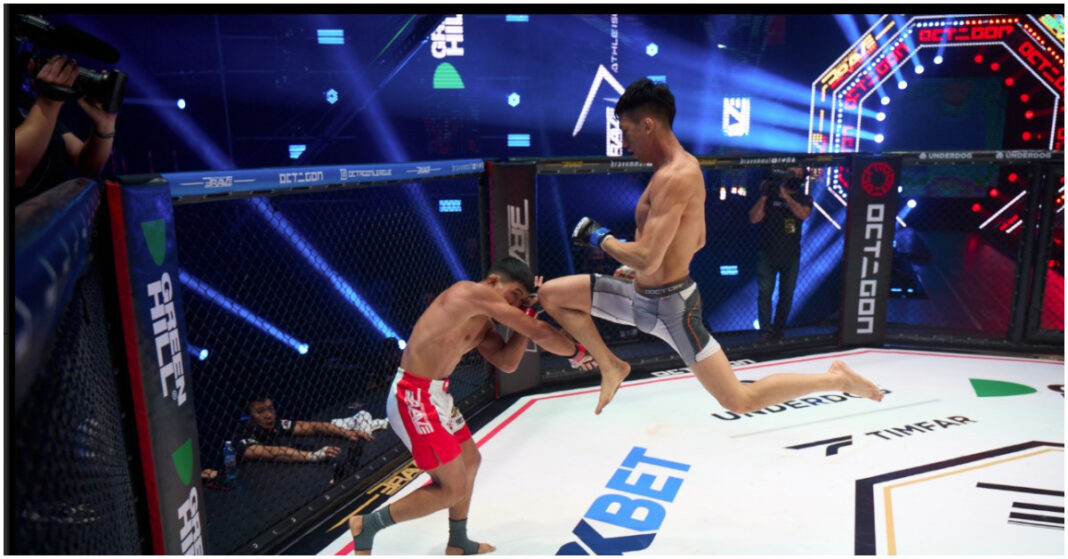 BRAVE CF held its final show of the year this weekend, with BRAVE CF 56 going in Belgrade, Serbia, on Sat. December 18. It has been an eventful 12 months for the Bahrain-based promotion, with 11 events being staged throughout the year.

To celebrate the year that was, LowkickMMA caught up with the three wise men of the BRAVE CF broadcast team, Commentators Phil Cambell and Kirik Jenness, and “The Roaring Lion,” BRAVE CF’s in-ring announcer Carlos Kremer.

My favorite fight of the year has to be the main event of Brave Combat Federation 53 in Almaty, Kazakhstan. That was Tae Kyun Kim taking on Nurzhan Akishev. These guys fought for three rounds and threw the rulebook completely out of the window.

They stood in the pocket, blasting each other with huge shots. Both guys looked like they could have been finished at any stage. Their faces were completely unrecognizable after the fight. Both guys landed huge shorts. Both guys took huge shots.

Tae Kyun Kim came away with the decision, but if anything, Nurzhan Akishev enhanced his reputation in a loss which is very, very rare in MMA. Tae Kyun Kim solidified his position as one of the best featherweights in the world and really staked his claim for a title shot.

Sam Patterson has to fight for the title categorically. He has to fight for the title. If you look at his body of work in Brave Combat Federation, not just this year, but as a whole, that young man has grown into one of the Premiere lightweights in the world with his performances as last fight against [Kamil] Magomedov finished him with a high elbow guillotine was absolutely huge.

Before that, beating a 25 fight veteran in Yiles Djiroun beating him over the course of three rounds. I’ve said in commentary multiple times. He has made himself undeniable as a bona fide contender in the lightweight division. So that’s a fight I would love to see—also, the rematch in the light heavyweight division, Mohammad Fakhreddine versus Mohamed Said Maalem. That’s a fight that has to happen.

Said Maalem believes that he should never have had the belt taken off him, and the decision should never have been changed to a No Contest. So there’s genuine animosity between these guys, and both these guys are fantastic fighters in their own right.

So potentially a very, very busy year for Muhammad Fakhreddin.

The fight I’d most like to see is the rematch between Sam Patterson against Brave Lightweight Champion Ahmed Amir, Egypt’s first Combat Sports Champion.

It was Wednesday, September 17, 2020, the Year of the Pandemic, in Kombat Kingdom, the magnificent Kingdom of Bahrain. I was helping out at the faceoffs for BRAVE CF 41; the second fight on the card was Abdulmanap Magomedov from Russia vs. Rahmatullah Yousufzai from Afghanistan.

I know Abdulmanap means something like Servant of Allah, and I know Magomedov is a popular name in Russia. There’s rules in MMA, and one of them is, if a fighter has an Arab-sounding first name and a Russian-sounding last name … he will win. I’m kidding kinda, kinda not. But Abdulmanap Magomedov was a former IMMAF WORLD CHAMPION making his pro debut. In sum, this man is a stepping razor.

Facung him was the unherladed Rahmatullah Yousufzai. BRAVE Combat Federation provides opportunities for some of the most storied fighters coming out of the amateur ranks, like Magomedov. It also provides opportunities for fighters from areas with precious little support for the sport, like Afghanistan. And BRAVE has the best scouting team in the sport. So I knew Yousufzai had to have talent, but still, he was a mid-card fighter from events I had never heard of, and I’m the sport’s official records keeper. In my mind, I thought Yousufzai faced enormously long odds. Not like Burj Khalifa long, like Great Wall of China long.

But when I saw Yousufzai stare into Magomedov’s eyes at the faceoffs, I realized he knew something I did not. The next day, fight day, Yousufzai was called into the BRAVE cage, and before entering, he prayed so fervently to his creator that I was overcome with emotion, felt honored to be witnessing what was about to happen, come what may.

Rahmatullah Yousufzai knocked out Abdulmanap Magomedov in 42 seconds. In that moment, I felt the vision of Shaikh Khalid like never before. BRAVE identified an unknown talent from a region where the sport is entirely on its own, gave him an opportunity, and, man; he took it. He took it.

I love the easy questions! I want to see Mohammad “The Latest” Fakhreddine fight in 2022. What weight division? I don’t care. Versus who? don’t care. Where? Don’t care. I just want to see The Baddest Mo Fakhro in MMA step into the BRAVE cage soon.

What were your favorite BRAVE CF moments of 2021?