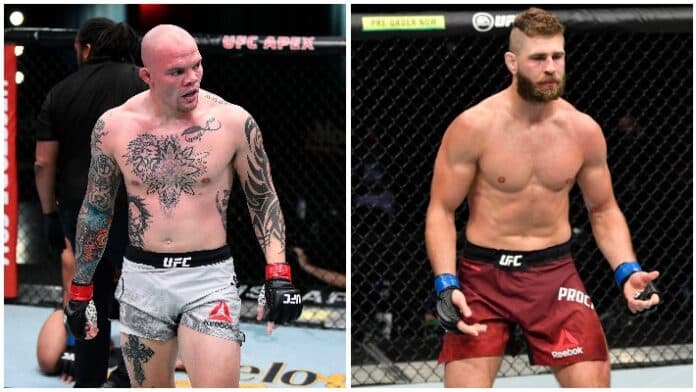 Anthony Smith would “love” the opportunity to fight Jiri Prochazka.

‘Lionheart’ is currently scheduled to square off against Ryan Spann on September 18. Meanwhile, Prochazka is expected to play backup for the upcoming light-heavyweight title fight between Jan Blachowicz and Glover Teixeira which will take place at UFC 267 on October 30.

In a recent interview with LowKickMMA, Smith expressed his admiration for Prochazka who he believes more than earned his backup spot with a fantastic performance against Dominick Reyes last time out.

“I would love to fight that guy. It just looks like it’s so much fun.” Smith said. “And honestly, he fought Dominick Reyes exactly how I would fight Dominick Reyes. Just get in tight, make it ugly, make him uncomfortable, don’t give him any space.”

The former light-heavyweight title challenger talked up a future fight between him and Prochazka.

“It would be bananas. It would be chaos,” Smith said. “Those are the kinds of fights that everybody’s really, really excited (about). I don’t have to like, be super focused on anything. I don’t have to worry about extra striking or extra jujitsu or extra wrestling. You’ve just got to get your sword as sharp as you can get it and just go in there and swing the god damn thing. That’s a lot of fun to me.

“Behind all that flashy unpredictability and the spinning sh*t and just the craziness that he does, it’s just pressure. That’s all he’s doing, he’s just pressuring people, and that’s what I like to do,” Smith added. “So, I feel like it would just be two hammers banging into each other. It would be a lot of fun. I feel like it would look like a really incredible game of bumper cars. You know, it’s just, you have to go in there and figure it out.”

Do you want to see Anthony Smith vs. Jiri Prochazka?