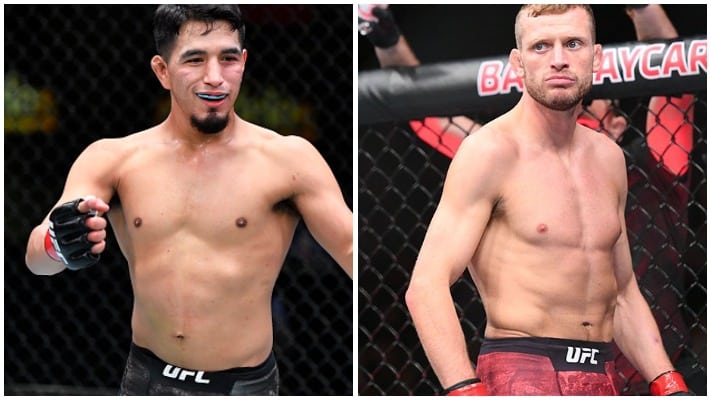 Adrian Yanez has a very clear picture of how his next fight will play out.

The 27-year-old is set to square off against Davey Grant on November 20 at UFC Vegas 43. Ahead of the bantamweight bout, Yanez sat down with LowKickMMA to talk about his English opponent.

“I’ll say he’s a formidable opponent. He’s one of those guys that’s kind of come across the cage, tries to take your head off the whole entire time and he’s going to have a smile doing it,” Yanez said. “I absolutely love it because you get two guys who have respect for other opponents in the cage and that usually ends up being the banger of the fight

Grant is renowned for his toughness and has never been stopped via strikes. On November 20 Yanez plans to be the first man to KO/TKO the County Durham native and says if he does that he will 100 percent have earned a Performance of the Night bonus.

“I’m telling you right now, he’s hard to finish, but if I finish him, I deserve 50 GS. I’m saying that right now, I finish him. I get the 50 GS for being the first man to stop Davey Grant (with strikes). I do believe I possess the power and I do believe I possess the technique to be able to get him out of there. You know, second, third round, that’s what I’m thinking.”

Do you think Adrian Yanez will be able to KO Davey Grant on November 20?