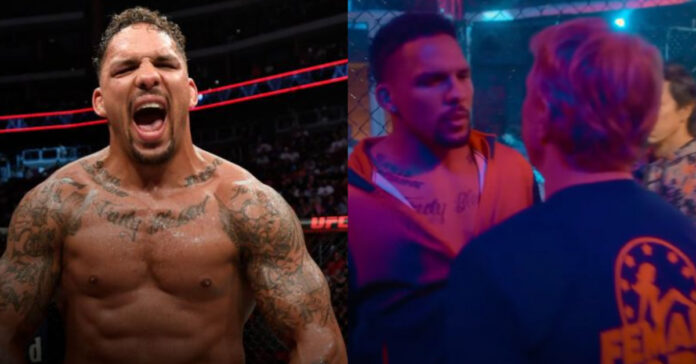 Since making the switch from American Football to MMA, Eryk Anders has amassed a pro record of 14-7, currently competing in the UFC’s middleweight division.

Since beginning his MMA career, Anders has jumped from strength to strength having faced off against a number of high-level opponents including the likes of Darren Stewart, Lyoto Machida, Thiago Santos, and Brendan Allen.

Eryk Anders‘ last bout was a controversial split decision loss against Jun Yong Park back in May of this year. However, Anders has also been making moves outside the UFC octagon.

In a recent exclusive interview with LowKickMMA, Eryk Anders spoke about his acting debut on the Netflix hit show “Cobra Kai” stating:

“The South here is starting to be a big hotbed for movie production because the taxes and tax incentives are way better here than they are in California. So they’re coming to Atlanta, they’re coming to Birmingham and they filmed a movie called Embattled with Stephen Dorff… He was the bad guy in the first Blade movie… The stunt coordinators came to the gym for that movie, because it was an MMA movie, and did some stuff there so we got to know the guys.

“Then Cobra Kai moved their production to Atlanta and that same stunt crew got on with Cobra Kai and they were like; ‘hey, we need this big Mexican-looking fella to go fight Johnny Lawrence.’ I was like all right and so I had to audition for the role and everything… I got the part… Took about two days to film my little portion of the it, I think it’s episode one or two of season five which comes out here on September 9th… It was quite the experience and hopefully I get to do it more.”

Grappling Fury 5 is upon us and Eryk Anders is ready

In the latest installment of Grappling Fury, Eryk Anders takes on fellow UFC middleweight Andre Petroski in a bout that carries a lot of intrigue. Anders is using the matchup to keep himself active in a safe environment, due to grappling contests carrying a lower injury risk than other types of competition. This is especially ideal when considering Anders will take on Kyle Daukas in 14 weeks’ time on a UFC Fight Night card.

Eryk Anders stated: “My last fight was in May and man, I really don’t like a lot of off time so I figured in between fights I could do wrestling tournaments… I used to do them a lot before I got to the UFC and just wanted to stay active without getting beat up. I think Jiu Jitsu and grappling is pretty safe, this grappling tournament there’s no leg attack which I think tis the most common injury in some of these submission Jujitsu tournaments or Grappler tournaments. The heel hooks and leg locks and things like that, but there are none of those so I think it’s pretty safe. Then I’ll compete at worlds in a GI so you know just trying to stay busy stay active and kind of keep those reflexes.”

Check out Eryk Anders’ full interview with LowKickMMA below: