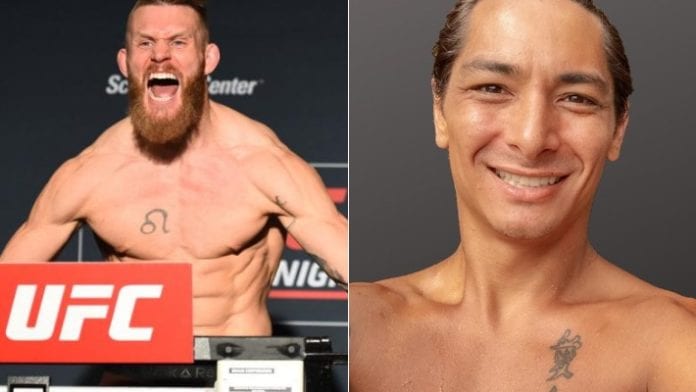 UFC veteran Diego Sanchez’s coach, Joshua Fabia, has been receiving a ton of criticism after his cornering job at UFC Rio Rancho.

Fabia was Sanchez’s one-man corner at UFC Rio Rancho against Michel Pereira. A lot of the audio form Sanchez’s corner made it into the broadcast, and Fabia could be heard giving Sanchez a lot of, what sounded like spiritual advice rather than technical fighting advice in between rounds. For this, Fabia has been under a lot of criticism for his coaching. His methods have been called into question as well.

With that being said, UFC welterweight Emil Meek, speaking to the South China Morning Post, told the story of a training session he once did with Sanchez and Fabia. It was certainly a unique experience. Meek explained that during one part of the session, Fabia actually chased after him and Sanchez inside a locked cage with a “sharp” blade.

“How can I put this,” Meek added, laughing. “I went in full-belief mode: everything they tell me to do, I’m going to do it 100 percent. Man, it was the craziest s*** I’ve ever done. At one point, Joshua, he was running after us in a locked cage with a real, sharp blade, to make us move.”

Meek went on to explain that he didn’t want to say anything negative about Sanchez or Fabia, but did admit that, if Sanchez wants to continue to keep his MMA game at the top level, he doesn’t think this is the way to go about it. Sanchez was down two rounds in the third round of his fight with Pereira at UFC Rio Rancho this past weekend before he was nailed in the head with an illegal knee.

Sanchez claimed he could no longer continue fighting after absorbing the illegal shot, and was controversially awarded the disqualification victory.

What do you make of Meek’s story about Fabia chasing him with a sharp blade during a training session?