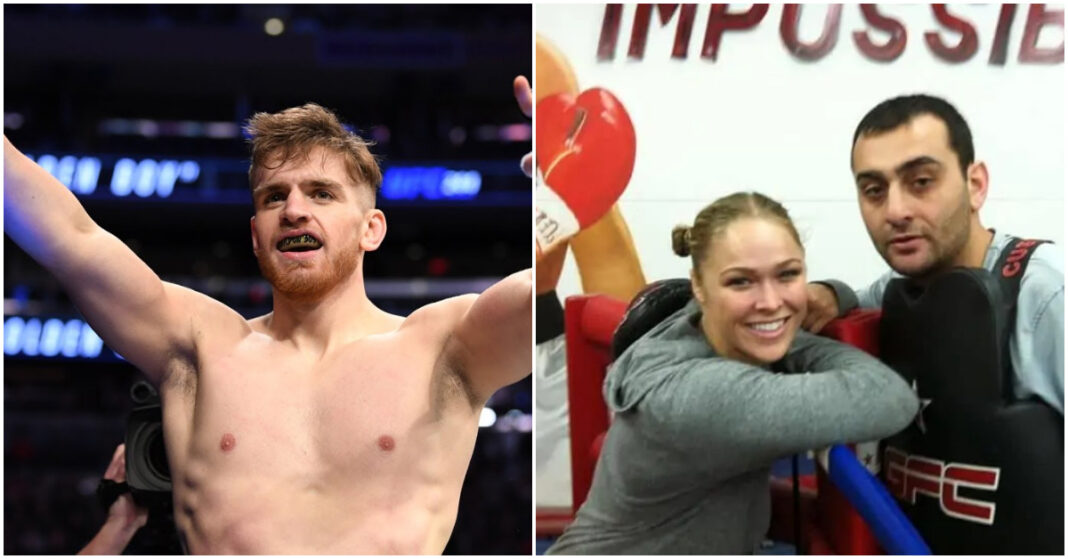 First appearing on Dana White‘s Contender Series, Edmen Shahbazyan was an exciting prospect that got signed to the UFC after he won The Ultimate Fighter Season 28 Finale over Darren Stewart. ‘The Golden Boy’ got off to a fiery start in the promotion racking up three wins in his first three showings, all of which he won by a finish in the first round.

Going undefeated in his first 11 professional fights, Shahbazyan would ultimately taste defeat against Derek Brunson in August 2020. He seemed to have hit a skid in his career as he went on to drop another two with his most recent loss coming against Nassourdine Imavov, who sliced through him with crucifix elbows.

Edmen Shahbazyan has no ill will towards Rousey or Tarverdyan

Having suffered three consecutive losses, the 24-year-old appeared to have lost some of the shine and allure he came in with. It’s now been confirmed that he has parted ways with Ronda Rousey and longtime head trainer Edmond Tarverdyan to make the move to Las Vegas.

In a recent interview with MMA Fighting, Edmen Shahbazyan talked about stepping away from the only gym he had previously known, and while there’s no ill will, he has not spoken to either of his former mentors since.

“Going off my past two fights, I feel a change was definitely needed and it was long overdue,” Shahbazyan said. “I looked at my options to see where I can be that I feel I can unleash my full potential and I believe Vegas had the best thing. I’m away from distractions. I can concentrate on training. Of course, you have the Strip here if you’re going to get wild but if you stay out of the Strip, for a fighter you can train here, go home and rest, come back to train, go home, rest. It’s a fighter’s life here.

“Of course the gyms, the high-level partners to work with. There’s a lot of good guys out here and constantly coming in because of having fights. It’s great. I look at my last few fights and a change was needed so this was the best choice.”

“I needed to change,” Shahbazyan said. “It was time. It was definitely time for me. It could have been done sooner but now I’m just happy to be here and get the new work in. I have not talked [to them] since I left. From my end, I have a good relationship [with them]. I don’t have any problem. All respect cause I respect what they’ve done for me but on my end, I’m good.” (h/t MMA Fighting)

Are you excited to see Edmen Shahbazyan return to action?