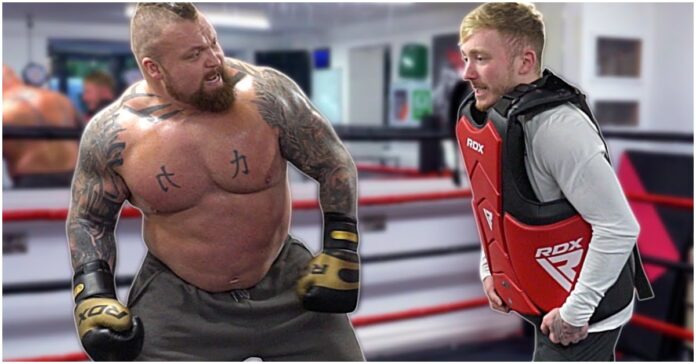 Eddie Hall is confident he’ll come out victorious as he responds to Joe Rogan’s critique of his fighting ability in brutally honest analysis.

UFC commentator Joe Rogan shared his thoughts on Hall’s boxing technique. It’s fair to say that the comedian and podcaster is not a fan of what he saw as he criticized his boxing abilities:

“That’s not good. Right away we’re seeing that we have a real problem,” Rogan said, after watching footage of the Englishman training.

“Yeah, this is terrible. He’s very rudimentary, but also you see that his body is very stiff.

“Looking at him sparring there, he’s just not moving so good… This is super stiff. He’s throwing these punches with his arms. These are arm punches, almost like he shouldn’t be hitting things.” (transcribed by GiveMeSport)

‘The Beast’ has responded to Rogan’s honest criticism defending his boxing ability as he said, “Look, people can speculate, they can make assumptions, they can guess, they can do whatever they want, but I’m knocking Thor out.

“There’s no doubt in my mind. So, people can say whatever they want,” Hall said.

“I take no offence to Joe Rogan’s comments. He’s an experienced guy, he knows what he’s talking about, but he doesn’t know the full picture. You look at a few clips, you can’t make assumptions from that. It doesn’t bother me in the slightest, it doesn’t put me off.”

Hall is scheduled to fight Hafþór ‘Thor’ Björnsson this weekend in what is dubbed to be “The Heaviest Boxing Match in History”. Both former World’s Strongest men have been hard at work to prepare for the upcoming boxing match as they sport a definitive new look.

Hall has lost about 40kg in preparation while ‘The Mountain’ leaned out by around 60kg. The pair almost came to blows at the face-off ahead of the bout in Dubai, UAE. The Englishman seems confident he’ll win in what he calls ‘The Desolation of Thor’.

Will Eddie Hall prove Joe Rogan wrong with a win over ‘Thor’?