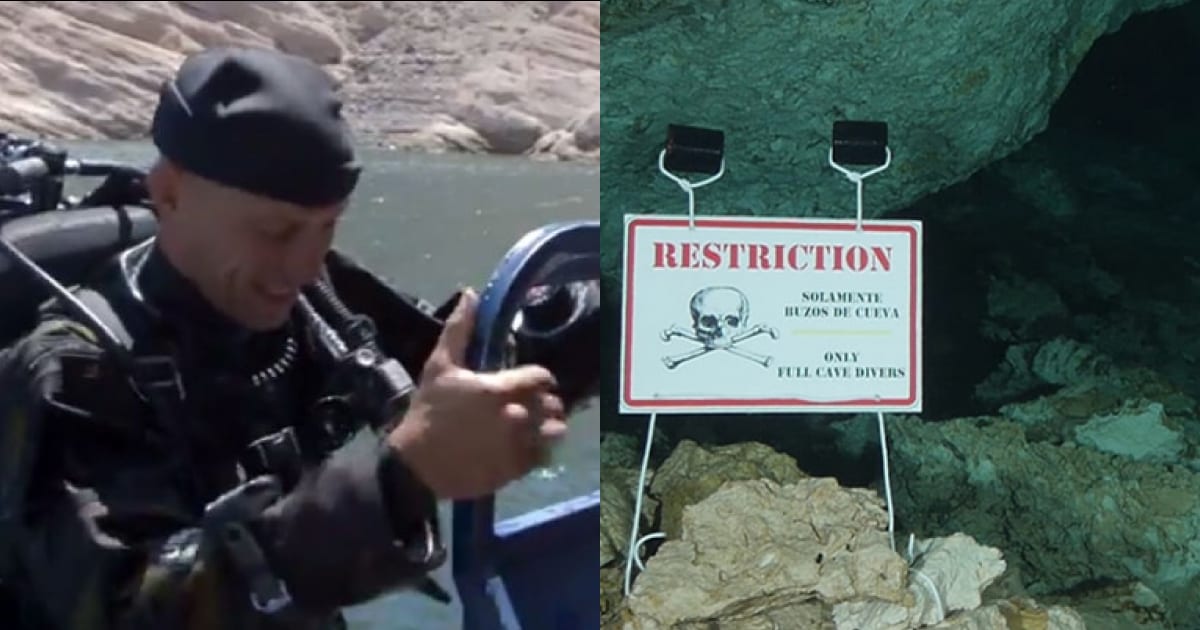 Making an appearance on the Joe Rogan Experience podcast earlier this week (Aug 29, 2018) Cerrone explained how he honestly thought he was going to die during his last cave dive.

“Cowboy” initially shared the story via social media a week ago.

Cerrone explained that he is grateful to be alive after experiencing a “catastrophic worst-case scenario.” However, that statement doesn’t even begin to detail the level of horror that Cerrone was facing.

The 35-year old Cerrone is an experienced cave diver and extreme sports junkie. But when “Cowboy” and one his friends decided to try a more difficult dive, Cerrone’s wife Lindsay warned that she was worried about his friends declining motor skills. And this could put them in danger. “Cowboy” did his best to alleviate any concern his wife has having. After all, nothing ever goes wrong on these dives.

Cerrone managed to cling to the ceiling of the cave, albeit, given the nonlinear nature of an underwater cave. His two glow-in-the-dark watches would be his only source of light as he blindly searched for the way out of his potential underwater tomb.

“You’re swimming against the current, so you’re going the wrong way,” Cerrone said. “I somehow worked that into my f*ck*ng panicked mind. ‘We’re swimming into the current, we’re swimming into the current, we’re going the wrong way.’ So I f*ck*ng turn and swim back, I’m back on the f*ck*ng mainline again. I find the main line just out into the clear, main line. ‘F*ck, f*ck, f*ck!’ I start hyperventilating and panicking and I’m thinking, ‘You f*ck*ng piece of shit, this is how people die, what the f*ck are you…?’ And I’m keeping in mind kissing my wife and kissing my kid and saying, ‘I’m coming home. I’m coming home.’

“So I do it again, f*ck*ng venture into the f*ck*ng great unknown, f*ck*ng abyss, total blackout. Another panic, another panic, f*ck*ng freaked out, can’t find my way, hitting my head, kicking, losing air by the f*ck*ng second. Because now I’m breathing hard and I’m breathing f*ck*ng irrational and I’m sucking my tanks dry. Mind you, there’s no answer to this after I breathe my last breath.”

During Cerrone’s brief moments of clarity, he was able to think of his family, and what they would think of his death, and that drowning is his “biggest fear”. He also decided to rig his buoyancy control device. A clever trick to lift Cerrone up toward the ceiling of the cave.

“When I run out of air, I’m now thinking in my mind, how am I going to die?” Cerrone said. “Tell my wife, tell my kid I’m coming home and now I’ve got to f*cking realize how am I going to die? I have a notepad that you carry in your pocket to draw and write on, I’m thinking, ‘What are you going to say? What’s your letter going to be? You’re writing a f*ck*ng death letter? You’re awake, you’re a fighter. We figure this out. We don’t f*ck*ng find a way to quit, you f*ck*ng bitch.’

“These are the conversations I’m having with myself while I’m in f*ck*ng complete panic mode and complete darkness, thinking that this is how people die. What the f*ck are you doing? You’re going to write a letter to you’re f*ck*ng kid and tell her how you f*cked up, ‘I’m sorry, daddy’s not coming home?’”

After a harrowing ordeal such as this, Cerrone is glad to be safe and sound and back with his family. Cerrone stated that he still has nightmares regarding the cave diving incident. However, this near-death experience isn’t going to slow “Cowboy” down when it comes to pushing the envelope like only he can.