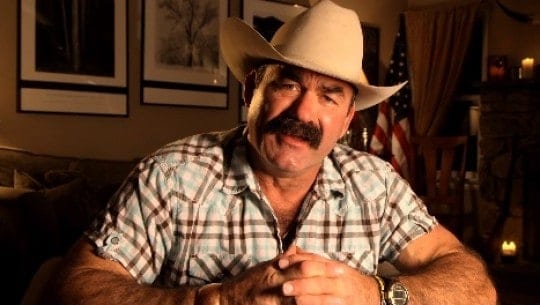 UFC and Pride FC legend Don “The Predator” Frye has always been known for letting his true feelings out into the open. He’s never one to hold back his thoughts on all things mixed martial arts (MMA), and his “Predator Picks” before some of 2014’s UFC pay-per-view (PPV) events were definitely one of the best comedic spots all year.

Out of the spotlight for a while, Frye recently came storming back during an appearance with Submission Radio. Not surprisingly, he spoke up about the fight on everyone’s mind, the UFC 189 featherweight title clash between Jose Aldo and Conor McGregor.

According to “The Predator,” who took his prediction in an odd direction, McGregor is already in the champion’s head and will win:

“I’ll go with one of my fellow white men. Seeing as everyone’s white and black and racist today, I’m going to pull out and go with the crazy ‘Mick’. He’s in Jose Aldo’s mind and poor old Jose doesn’t know whether to shit or go blind.”

Frye has also been keeping tabs on his old Pride nemesis Ken Shamrock, who is scheduled to take on Kimbo Slice in the main event of June 20’s Bellator 138. Frye doesn’t think that Shamrock we’ll make it to the fight, and if he doesn’t, “The Predator” is more than willing to step right in and take his place:

“I’m just getting myself in shape, just in case Ken gets hurt and pull out, and then I’ll step in his place and fight Kimbo. I threw my hat in the ring. I think it’d be a great fight between Kimbo and I.”

Finally, Frye was asked about the ongoing war of words between UFC women’s bantamweight champion Ronda Rousey and Invicta FC featherweight champion Cristiane “Cyborg” Justino. An old-school kind of fighter through and through, Frye believes it’s time for Rousey to stop whining about weight classes and Cyborg’s past drug test failure and simply take the bout:

“Oh my God, this is so fucking stupid. Why is she bitching about – who’s the women’s fighter that she keeps complaining about? Cyborg. Fight Cyborg. Tell her to shut the hell up. I don’t want to hear you say you can fight a man until you fight Cyborg, and don’t insist that she get s drug tested for anything, and don’t insist hat she makes weight. Shut the hell up and fight the woman and like a real fighter does, don’t worry about the rules and this and that.”