Eric Nicksick, the head coach of UFC heavyweight champion, Francis Ngannou, has claimed that a doctor had urged his student to withdraw from last weekend’s UFC 270 heavyweight title unification bout with Ciryl Gane.

Headlining UFC 270 on Saturday, Francis Ngannou managed to successfully unify the heavyweight championships with a unanimous decision (48-47, 48-47, 49-46) victory over the undefeated interim titleholder, Gane, utilizing a surprising gameplan of grappling and wrestling.

However, prior to the fight, speculation began to mount that Francis Ngannou had suffered a knee injury in the run-up to his title unification bout. And fuel was further added to the fire when the Batie native made his Octagon walk – sporting a pair of knee braces.

Securing a whopping four separate successful takedowns against Gane as well as attaining significant periods of top control in the third, fourth, and fifth rounds, Ngannou confirmed post-fight that he had suffered a knee injury.

Speaking with UFC color commentator, Joe Rogan, Ngannou confirmed that he had suffered a complete tear of his ACL and partial tear of his MCL just 25 days before his title unification clash with Gane during a training session at home base, Xtreme Couture.

Expected to undergo a surgical procedure in order to address his right knee injury, Francis Ngannou, as per his head coach, Nicksick, was urged to withdraw from UFC 270 by a doctor during a pre-fight consultation just days before the bout.

“I was a nervous wreck,” Erick Nicksick told MMA Junkie. “I think a lot of the things that my head was telling me was to pull out of the fight, and I just didn’t like the way that the knee injury was and the situation that the opponent that we had with the particular injury that we had. Obviously, we did want to get into some wrestling, but I didn’t know how we were going to be able to wrestle without having the cardio the last three-and-a-half weeks, as well as the stability of the knee, and I’ve just got to give all the credit to Francis (Ngannou). That guy’s willpower, his mental capacity, what he wanted to do, he just unwavered (sic) the entire camp.”

“We had kind of that come-to-Jesus moment last Friday before we left,” Eric Nicksick said. “We got word from a second opinion doctor out here in L.A. that he was adamant that Francis (Ngannou) should pull out. He thought that he could ultimately lose a year-and-a-half to two years after a full knee reconstruction surgery if that leg would have gone wrong, something would have gone wrong. So we got that word last Friday. We had practice that day so we all met at the (UFC Performance Institute), and thart’s kind of when I just said (to Francis Ngannou), ‘Dude, what are we doing here? I love you, bro. You’re my brother. But as your coach, I do have to tell you what I think is right, and this is what I feel is right in this situation.”

“But if you as the fighter say that you’re going to fight, I’m going to have your back 110 percent,” Eric Nicksick explained. “But I can’t live with myself without telling you how I truly feel., This isn’t about anything other than your safety and your legacy, in my opinion,’ So we agreed upon what we were going to do was, we were going to come to California fight week, (and) we were going to meet with the doctor out here in L.A. The moment we landed, we went right to his office and basically waited outside and he came out and I could tell by his face, I’m like, ‘Oh, we’re fighting.’ Once we knew that, I didn’t bring his knee up one. I didn’t say anything about it. I didn’t want to talk about it anymore because that, as far as I was concerned, was behind us. We’re going to fight with what we’ve got.”

Saturday’s victory for Francis Ngannou came as his sixth consecutively, as well as his second in a championship bout following last March’s undisputed title success against two-time opponent, Stipe Miocic. 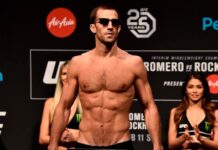