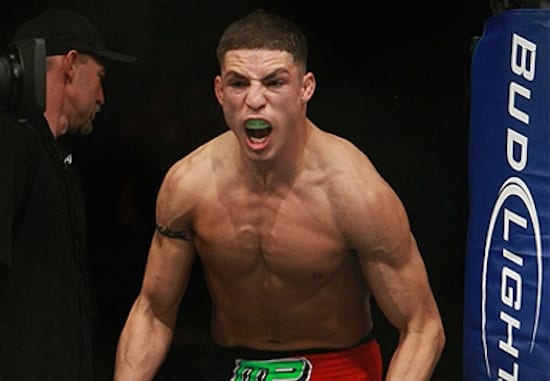 MMA veteran Diego Sanchez has gone on a fiery rant about weight-cutting after Kevin Lee came in 2.5lbs overweight for his lightweight bout against Charles Oliveira.

“Another main event misses weight and he will win.. I have been saying it for years weight cutting is bullshit it’s bad for the fighters health! Why no change? Why no hydration tests? If your going to allow weight cutting then you should definitely allow IV’s it’s impossible to rehydrate adequately! Therefore creating a unfair place for competition where some guys don’t give a fuck and use IV’s anyway? 50% of @ufc fighters still use IV’s to recover because @usada doesn’t really check or make sure they are not! The ones like me that actually do fight fair and natural are forced to fight men weighing 25 lbs more just so I can fight healthy with a hydrated brain?! Wtf it seems to me ufc would rather have fighters rung out looking ripped like fitness models at there minimum weight then blow back up. Maybe they want fighters cutting weight so they can be easily knocked out with there dehydrated brains! All I’m saying is do they really even care? No they don’t! Just like last weeks fight joe b was ko’d by a bigger man that missed weight by three lbs?! when he only has 20 hours to rehydrate and it’s impossible to rehydrate the brain and human cells with out an iv. People will say he was just caught but had he been at 100 % health with no severe dehydration he could have probably absorbed and survived the blow with his great conditioning maybe not?! But from my personal experience every time I was i was knocked out I cut a lot of weight and IV’s were prohibited.”  (Transribed by BJPENN.com)

Do you agree with Diego Sanchez about the issues with weight cutting?