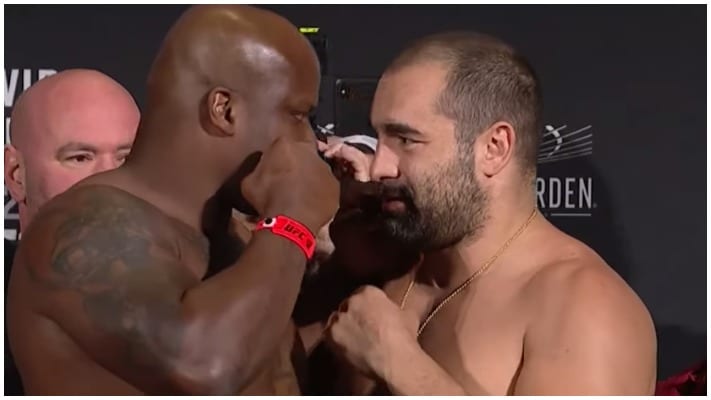 Next up on the UFC 244 main card is a heavyweight affair between Derrick Lewis and Blagoy Ivanov.

Round 1: Ivanov takes Lewis down and is in side control. He attempts a submission but Lewis gets out of it and explodes with some strikes. Ivanov returns some and they clinch up. Lewis takes Ivanov down now but the latter gets up and they clinch again. Ivanov attempts a hip toss but Lewis stays on his feet. They separate and remain cautious for the remainder of the round.

Round 2: Ivanov attempts a big left hand and clinches up with Lewis. Lewis attempts a missed uppercut as they separate. Ivanov gets hurt when Lewis unleashes a flurry but manages to take the American down. He attempts another submission but Lewis gets out of it again and explodes on the feet but Ivanov survives. They clinch up once again. Lewis ends up hurting Ivanov with strikes who is now bleeding but not out of this yet. Ivanov ends the round with a beautiful trip.

Round 3: It’s a much more slow fight now with both heavyweights slightly gassed out. However, it’s Ivanov advancing more. He lands a combo and clinches up with Lewis. He attempts to trip Lewis but is unable to. Ivanov lands a left while Lewis misses with a counter uppercut. Lewis attempts a takedown but Ivanov stuffs it and seems to be looking for a submission but Lewis gets up once again. They clinch again. Lewis looks to end the fight in the last few seconds but Ivanov dodges and survives.