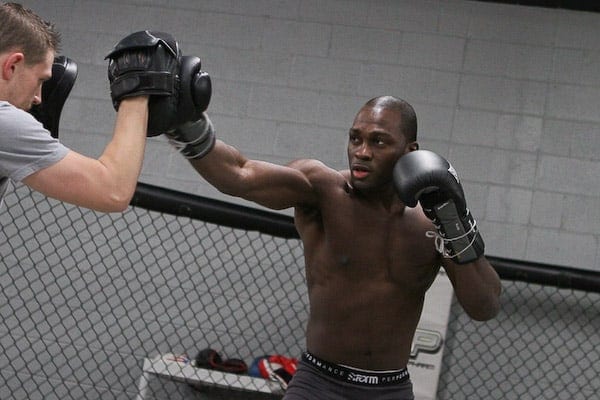 It was a huge night for Anthony Johnson at UFC 191, not only did he face fellow knockout striker Jimi Manuwa on the PPV (pay-per-view) main card, but he entered the octagon on the back of some pretty damning media coverage. Amidst allegations of domestic violence and animal cruelty, ‘Rumble’ was on form and scored a swift first round knockout over ‘Poster Boy’, answering his critics in dominant fashion.

There was a critic of Johnson’s performance though, not during the fight, but in the post-fight interview. UFC middleweight Derek Brunson Tweeted saying he thinks ‘Rumble’ should’ve used his time on the microphone to apologize for the ‘yoga mat’ incident and address the accusations made by his purported ex-girlfriend in recent days:

That would’ve been a great time for Anthony Johnson to apologize & make a statement against domestic violence and live it! #UFC191

Johnson has already spoke about the animal cruelty claims made in the last two weeks, as quoted by MMAFighting’s Marc Raimondi:

“I’m not what the media tries to make me out to be, but I am who I am,” Johnsons aid. “That whole kennel thing, that’s not even my dog and people want to make it sound like it’s my dog. But I do crop my dog’s ears. At the same time, they want to talk about dogs with cropped ears, they need to go after everybody. They’re just trying to target me just because.”

There was an anti-domestic violence rally held outside the MGM Grand Garden Arena in Las Vegas last night (Saturday September 5, 2015) but it no effect on the show going down without a hitch. Further protests outside The Glendale’s gym in Arizona and Blackzilians Jaco Hybrid in Florida were announced just before the Fight Pass prelims kicked off.

With Travis Browne and Johnson both cleared in investigations of domestic violence in recent history, is this trial by media going too far? Innocent until proven guilty should be the mantra in these scenarios, but obviously these type of sustained allegations prove very negative for both Johnson’s and the UFC’s image.

Should ‘Rumble’ heed the advice of Brunson in the moments after his epic win, or is Johnson just being wrongly targeted here?

With no solid evidence aside from the gym incident, judgement should remain reserved, but this messy situation will come to a head soon.