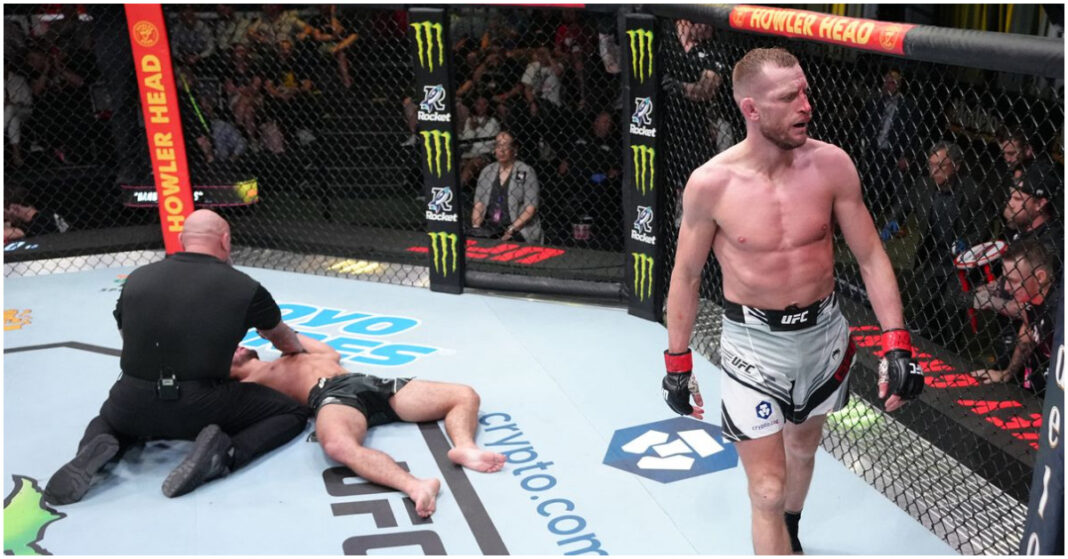 UFC bantamweight Davey Grant is looking to get on the cards for UFC London.

Coming off a highlight-reel finish this past weekend, Davey Grant delivered one of the coldest knockouts in the UFC. Going into the bout reeling off two losses, Grant finished his opponent, Louis Smolka, in the opening seconds of the third round. A night of low kicks combined with his technical prowess saw the 36-year-old Englishman deliver the finishing strike on the ground.

In the post-fight press conference for UFC Vegas 54: Blachowicz vs. Rakic, Davey Grant was asked about getting back to winning ways at a crucial point in his career.

‘Dangerous’ expanded on his mindset of looking for knockouts, which he achieved last Saturday.

“I expect a war and anything else, or anything less is just a bonus. So I always go in there expecting a war but I’m always trying to knock them out early out. You don’t get paid for overtime and I just want to try and get quick finishes. I’m not here to try and get Fight of the Nights. I want Performance of the Nights. I want quick knockouts but I’ll take whatever I can get.”

Grant shared his thoughts on getting on the card for UFC London.

“It’s always great to go and fight in London. It’s the capital. It’s been a long time since I fought there,” Grant said. “Getting a good reputation now seems to be putting on some really good fights. Yeah, it’d be fantastic to fight in front of a crowd there.

“I like the Apex cards as well. I’m happy to fight anyone anywhere honestly. Don’t even have to tell me who just tell me where and I’ll turn up.”

Davey Grant doesn’t get the bonus

In one of the more underrated cards of the promotion, UFC Vegas 54 packed some exciting fights throughout the night. Andre Petroski opened the prelims to hand Nick Maximov the first loss of his carer. Katlyn Chookagian outscored Amanda Ribas, and for the main event, Jan Blachowicz took home a win over Aleksandar Rakic by TKO due to Rakic’s knee popping out in the third round.

While fans were expecting Davey Grant to grab the Performance of the Night bonus, the extra $50,000 was awarded to Ryan Spann for his first-round finish of Ion Cutelaba.

Grant may not have got the bonus that would’ve been his fifth straight, but he did put on a thriller against Smolka and has proven to be one of the most exciting fighters in a stacked bantamweight division.