LowKickMMA.com
Home UFC News Darren Till fires back at Khabib’s Muslim jibe at Khamzat Chimaev: ‘Does... 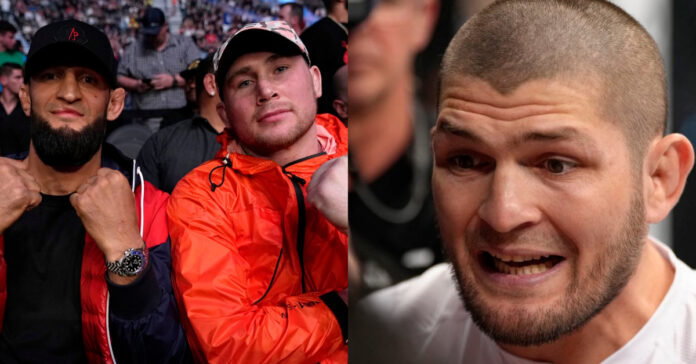 Darren Till issued a fiery response to Khabib Nurmagomedov for his comments aimed at Khamzat Chimaev’s team.

Chimaev is coming off a sensational finish over Kevin Holland this past Saturday at UFC 279. He was scheduled to headline the card but needed a new opponent after missing weight by seven and a half pounds. Following him coming in overweight, former lightweight champion Khabib stated that Chimaev did not have good people around him and suggested he get more Muslims in his entourage.

In an interview with Brett Okamoto for ESPN, Till pushed back against Khabib’s claims that Chimaev needed more Muslims around him.

“I seen Khabib, sort of like saying, ‘Khamzat doesn’t have good people around him.,’” Till said. “Now, I get it, I get like the Muslim faith and that. I’ve got some very close Muslim friends here in Liverpool and abroad or in Dubai and stuff like that. I just don’t like him saying, I don’t know if he’s directing at me or someone within Khamzat’s team, like coaches, teammates or whatever. There’s a few of us who aren’t Muslim. Now, I don’t like it because, one, I’ve only got Khamzat’s best interests.

“When Khamzat posted that meme saying it’s my fault, there was no problem. Direct all the blame on me I don’t care if it makes stuff easier for you. I would rather him direct the blame on me so when he posted it, and I’ve seen it, I was sat next to him, I was like, ‘what the f**k?’ and he’s laughing. I don’t care.”

Till talked about the backstage interaction at the pre-fight press conference which ultimately got canceled.

“My only goal fight week was to watch him win the fight. I wanted him to just make weight and win the fight. I’ve got his back more than anyone. Even when Khamzat was backstage on his own, they made us go to the front and then Nate came in late with the same group of people. There was five of us and five of them and they never went straight backstage. I jumped over the gate and I went on backstage, I was shouting like, ‘Dana, Hunter, and everyone.’ Why the f**k was I not with Khamzat? Why was he left alone?”

“The Gorilla” referenced the times Khabib missed weight and reiterated his stance.

“Khabib’s missed weight like five times. He’s got good people around him. We are not coming out now saying. It’s just because me and Khamzat have a bit of fun on camera, we’re a bit wild, does that mean I’m not good peoples or his coaches aren’t good peoples? His Brazilian jiu-jitsu coach is one of the best grapplers of all time. He’s not Muslim, does that mean he’s bad peoples?”

Do you agree with Darren Till on what Khabib said about Khamzat Chimaev?