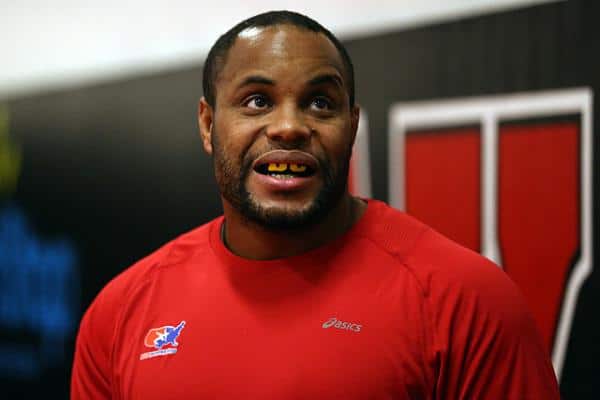 Daniel Cormier isn’t the most beloved champion on the UFC’s roster today, and he compares the hate he’s received to that of WWE Superstar Roman Reigns in the world of professional wrestling.

Yesterday (Sat. April 8, 2017) Cormier successfully defended his 205-pound title against knockout artist Anthony Johnson, who subsequently announced his retirement from mixed martial arts (MMA) competition following the contest, for the second time in his championship career. Despite pulling off a great finish in the second round, the crowd was still unable to get on ‘DC’s’ side following the win.

During the post-fight press conference yesterday Cormier addressed his current heat with the MMA fan base, and compared it to the same hate that pro-wrestling champion Roman Reigns, who comes off of a big victory of his own when he retired The Undertaker at Wrestlemania 33 last week, suffers in the WWE (quotes via FOX Sports):

“I was watching WWE WrestleMania last weekend and I said wow it would be great if Roman Reigns pins the Undertaker clean. It’s how the old school guys do business. Monday night, Reigns walked out to the ring and they booed him for 10 minutes, would not allow him to talk but it was the most organic crowd that they’ve had in a really long time. He said ‘this is my yard’ and he left. It was perfect because they were playing the game for him. That’s me,” Cormier said.

“If I’m in the Octagon and I’m berating Jimi Manuwa and Jon Jones, it’s my Octagon. I’m the one in there fighting right now with that gold belt. So you’re going to sit there and you’re going to take it. I insisted they didn’t put a microphone by either one of them. Sit there with the camera in your face and just take it. Because I’m the one out there laying it on the line. They don’t like it, it’s fine.”

While Cormier was a little pondered as to why fans booed him at first, he’s grown to remain indifferent on the matter. As long as you’re invested in his fight, Cormier couldn’t care less for your reaction towards him:

“Initially, I was taken back a little bit by people booing me, but then I realized, anyone that knows me and anyone that has spent any time with me, they don’t feel that way. They don’t want to boo me. They don’t feel they want to be away from me. They enjoy the time that we spend together and those are the people that matter. If people want to boo, that’s fine, just don’t not care,” Cormier saod. “That’s all I care about. Just don’t be indifferent. As long as you care, I am fine.

“So when they’re booing in there, it’s fine. It just bounces off me.”