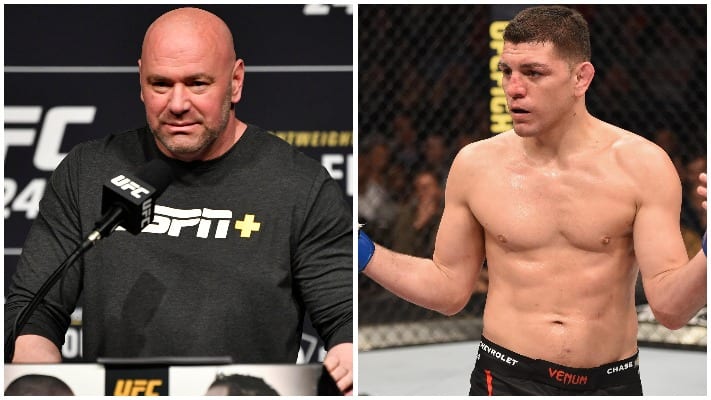 Diaz was in attendance at UFC 261 and sat down with the promotion’s president following Kamaru Usman’s spectacular knockout win against Jorge Masvidal.

White has now spoken out for the first time about how his conversation with Diaz went.

“It went good,” White told ESPN. “My whole thing with Nick Diaz is I just question how bad he really wants to fight. We got together, we had a great conversation, talked about a possible comeback for him, I just don’t know. We’ll see how it plays out this summer and the rest of this year.”

READ MORE:  Jon Jones vs. Jake Hager Grappling Match Is In The Works

The older brother of Nate Diaz hasn’t fought since 2015 and hasn’t tasted victory inside the Octagon since 2011. White admits the massive layoff from fighting is something that worries him.

“It’s just the amount of time that he’s taken off already,” White said. “When you hear him talk about fighting, when you hear him talk about the sport – and I sit down daily or talk to daily hungry, young savages that want to break into the top 10, become world champions, all that stuff – Nick Diaz has done it all, seen it all. He’s been in big fights. I just don’t see that in him when I talk to him.”

Despite his reservations about booking the former Strikeforce champion, White insist the final decision will lay with Diaz.

“He’s a grown man,” White said. “This guy says ‘I want to fight,’ we agreed to a fight, and doctors say he’s fit to fight, it has nothing to do with me. …

“At this point in his career, I think that they’ll come back and say ‘we want to fight this guy,’ so we’ll see who they say they want, then we’ll go from there.”

Who do you think Dana White should match Nick Diaz against?