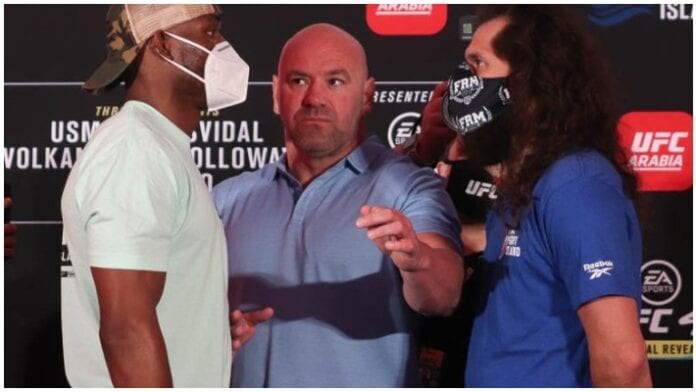 Dana White was certainly pleased with how well UFC 251 did this past weekend.

The pay-per-view kicked off the Fight Island events on Saturday with a stacked card featuring three title fights.

Of course, the biggest fight on the night was the main event which saw Jorge Masvidal step in on six days notice to face Kamaru Usman for the welterweight title.

White: Masvidal Is A Big Star

Although Masvidal failed to win the strap, there was plenty of interest in the event thanks to his addition and according to reports, it generated approximately 1.3 million buys — making it one of the biggest pay-per-views in UFC history.

“It was a very successful event,” White said on Tuesday when asked if the figures were accurate (via MMA Fighting). “We’re happy. This thing killed it across the board in every way you could possibly kill it. It was awesome. The thing did really well.

“… I said it to you guys the other night, when you put on a fight, a successful promotion of an event, it’s a big melting pot of different things. ’Fight Island’ was a massive star in this thing. Masvidal is a massive star. Obviously, Usman, the champion and a guy that we’re all starting to realize is tough to beat and a great card underneath it. It all came together perfectly.”

While it’s unfair to attribute all those buys to Masvidal — who became a mainstream star after his impressive 2019 run — it’s clear that his addition clearly drummed up even more interest.

And it appears White acknowledges that Masvidal is one of the few in the promotion who can now move the needle.

“Yeah, he’s a big star,” White added when asked about Masvidal’s status as a top draw.

Do you think Masvidal played a big role in the UFC 251 buyrate?