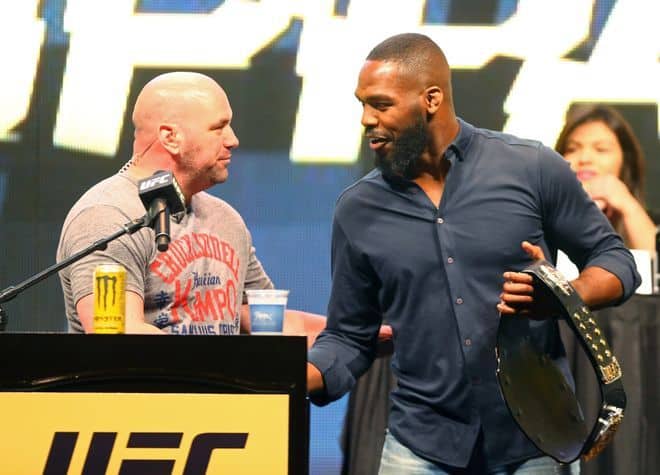 With Jon Jones recently becoming incredibly active on social media in the weeks leading up to his latest drug-related hearing, the UFC’s frontman has shed some light on the messy situation.

Dana White has repeatedly stated he had not talked to disgraced former champion Jon Jones since his latest drug-related controversy, but that supposedly changed this week.

White was understandably miffed at Jones failing a drug test for anabolic steroid Turinabol during his UFC 214 win over Daniel Cormier last July, a disturbing circumstance considering he had just returned from a one-year suspension due to banned substances clomiphene and Letrozol prior to his scheduled UFC 200 rematch with “DC.””

But White told TMZ Sports he and “Bones” had worked things out and while he isn’t certain Jones could return, he certainly wants him to:

“I don’t know. Obviously that would be great, you know? You know, it’s crazy you asking me about Jon – Jon and I talked yesterday for the first time. For the first time since his last fight.”

According to White, Jones is focusing on the positive (as always) and training in an effort to hopefully come back:

“He sounds good and says he’s, you know, looking at positive things right now and focusing on training. He wants to come back.”

Wanting to come back to fighting and being able to are two different things, especially for Jones, who has a long list of outside-the-cage troubles that need not be reiterated here.

So while White obviously wants one of his biggest stars back in the cage, he admitted it was up to USADA to decide his future:

“I don’t know. That’s up to USADA, I have nothing to do with that.”