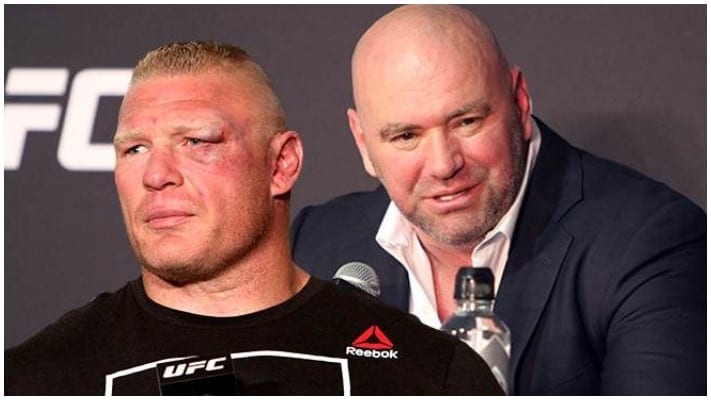 A few weeks ago fans got themselves into a frenzy about the possibility of Lesnar returning to the UFC after it was revealed he was a free agent after opting against re-signing with the WWE.

The 43-year-old was called out by pretty much everyone in and around his weight class. Most notable was a call out from former light-heavyweight king Jon Jones who had just announced his intention to compete at heavyweight.

Speaking to press earlier this month White revealed he was open to making a fight between Lesnar and Jones should both men want to make it happen.

“He’s 43 years old and he’s got a lot of money. I don’t know what his plans are and how his body feels or any of that. Like I said, I haven’t talked to him. (TMZ) asked me about it because his contract is up and I said if he calls me and he’s interested in fighting, then I would obviously consider making that fight.”

Speaking to TMZ Sports yesterday White provided an update of Lesnar’s potential MMA return. The UFC boss was asked by the interviewer if he’s heard from Lesnar since reports surfaced that the former UFC heavyweight champion was a free agent.

“Not a word,” White replied.

The conversation then moved on to if White wants to hear from Lesnar regarding a comeback fight. White revealed he would be happy to speak with the WWE superstar but believes the likelihood of him returning to fighting is minuscule, he said.

“I’d love to hear how he’s doing and how his family is and things like that but I think that’s going to be the extent of a conversation with him. The guy has had a long killer career. He actually came in and became a UFC heavyweight champ and the guys made a lot of money. I just don’t see him coming back over here again at his age.”

Do you agree with Dana White? Is Brock Lesnar unlikely to want to fight again at 43 years old?