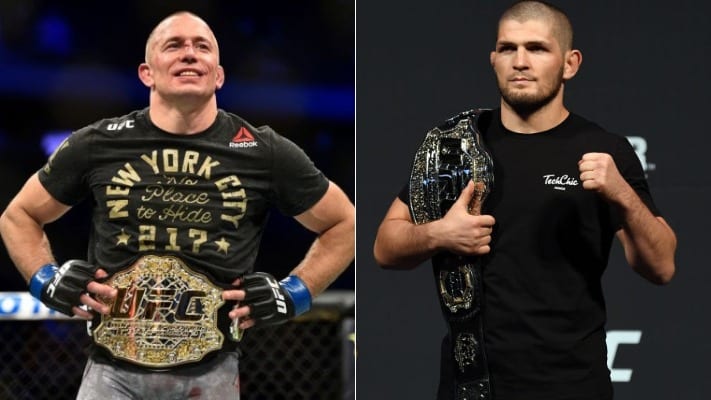 UFC president Dana White is open to the idea of Khabib Nurmagomedov fighting Georges St-Pierre in his final fight for the company. The undefeated Russian is due to face interim lightweight champion Justin Gaethje on October 24 and will likely have just one more fight afterward.

White told ESPN that Nurmagomedov is definitely fighting Gaethje next and will likely only compete one more time after that. The rematch with Conor McGregor is very much on the table for the UFC boss and the fight he favours, but due to the pair’s history that may not happen.

“I don’t know, obviously he has got this Gaethje fight that is a done deal. He is fighting Gaethje next. I don’t know who his last fight would be to make him 30. No clue, I mean listen, Conor McGregor fight,” White said. “I know Conor has always wanted that fight since the last one, I mean that is the fight to make. I don’t know we will see how this all plays out. But, the Gaethje one is absolutely, positively the next fight for him.”

One option proposed by Brett Okamoto was a potential fight between ‘GSP’ and ‘The Eagle. White is very much on board with making that fight happen and will try to make it should Nurmagomedov want it, he said,

“Sure. Yeah, it’s the last fight of his career the guy, the guys been great. He’s been great to the company, he’s been great for the sport,” White said. “And, I like Khabib Nurmagomedov a lot and I would do anything Khabib wanted to do.”

The fight now seems unlikely after St-Pierre seemed to confirm his retirement from MMA earlier this month after being called out by the welterweight king, Kamaru Usman, he said.

“Do I really want to go back into a hardcore training camp of two months, put myself in jail so to speak and you know, getting ready for hell. And I’m like, no, I don’t. You know, I’ve done it for a very long time, and unfortunately in my sport there’s too many guys that retire too late, and I do not want to be one of these guys. I’m very fortunate, I’m healthy, most importantly, and I’m also wealthy. I came at the right time, the right timing, I made a lot of money. And I think when I matured and calculated the pros and cons, it’s better I stay retired.” (Transcribed by BJPENN.com)

Do you think Dana White will be able to convince Georges St-Pierre to end his retirement and face Khabib Nurmagomedov?