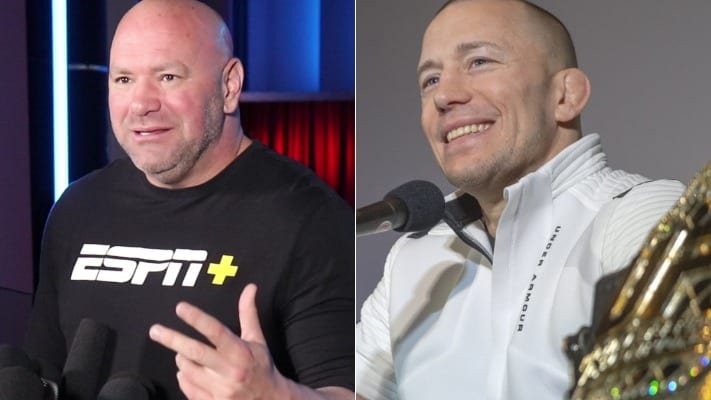 UFC President Dana White didn’t seem too keen on the matchup, as he felt it simply didn’t make sense to grant “Rush” a title shot at 155 pounds with fighters like Tony Ferguson waiting in the wings. However, speaking to TSN’s Aaron Bronsteter, White sounded a bit more optimistic about making the fight happen.

The UFC boss stated that if Khabib wants the fight bad enough, the Las Vegas-based promotion might have to look into making the bout happen. Of course, White still doesn’t think the fight would make sense either way (via BJPenn.com):

“I guess if we get into a position where Khabib wants GSP bad enough, we’ll have to talk about it. But at the end of the day, it doesn’t make sense to me,” White said. “You have guys lined up behind Khabib like Tony Ferguson.

“”Then you got Conor McGregor who wants a rematch. You have guys backed up who want a title shot at that division. You can’t back out of retirement and hand pick fights you want when you didn’t keep your word with me on defending the middleweight belt.”

One thing that really irks White the wrong way is the Canadian legend going back on his word. White granted St-Pierre a middleweight title shot against Michael Bisping in 2017. Their agreement was, if “GSP” won, he’d have to defend the 185-pound title.

Instead, St-Pierre vacated the strap due to apparent health concerns, and attempted to come back and lobby for a title fight at lightweight:

“I love GSP, he’s the best ever. Great guy,” White said. “But GSP and I had a deal. He was going to fight Bisping for the middleweight title and if he won, defend the title. He bailed on that, he didn’t do it. You can’t just come out and hand pick fights you want for the title.”

Do you think St-Pierre will ever return to the Octagon to fight Khabib?