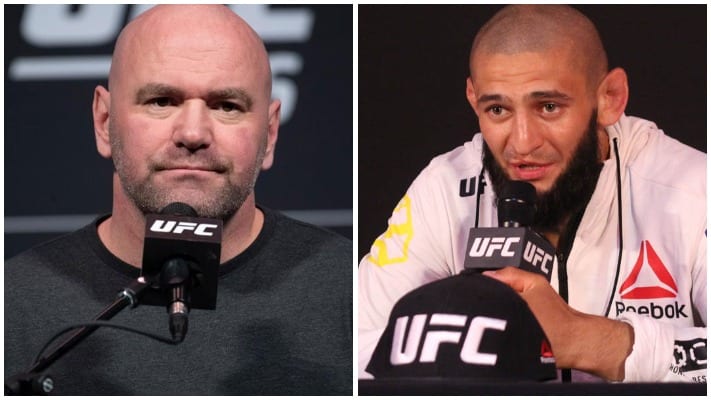 The undefeated Russian standout will square off against Meerschaert at middleweight on the undercard of Colby Covington vs. Tyron Woodley on September 19 If he wins Chimaev will then face Brazilian submission specialist Maia on ‘Fight Island’ in October.

Many including Meerschaert have found the double-booking to be disrespectful. White insists that is not the case and he is just allowing Chimaev the chance to be active.

“The thing is, the guy wants to keep fighting,” he said at the Dana White’s Contender Series 32 post-fight press conference Tuesday. “He wants all these fights back-to-back. It’s no disrespect to his opponent, he’s either going to win or lose. That has nothing to do with us. That’s up to them, but to do that, for him to really fight two fights in a row, you have to book him. And for a guy like him, I would never do that for somebody else. I’d be like, ‘Relax. Let’s see if you get through this fight,’ but what I’ve seen from him, I’m willing to do that with him.”

“It’s fascinating,” White said. “We’ve never really had anybody that’s doing anything like he is right now. So I could see why you would say, ‘Don’t you think this is disrespectful booking a fight for him when he’s got a fight?’ but that’s how you have to do it. It’s interesting, I like it, and I’ve never had a guy like this.

“It’s fun, I’ll play this game with him. After what I saw in his first two fights – he fought real guys, he didn’t fight chumps. This isn’t a guy who blew through a couple of set-up fights. He beat real people, and I’m going to see how it plays out.” (Transcribed by MMA Junkie)

Do you think Dana White double-booking Khamzat Chimaev is disrespectful to Gerald Meerschaert?