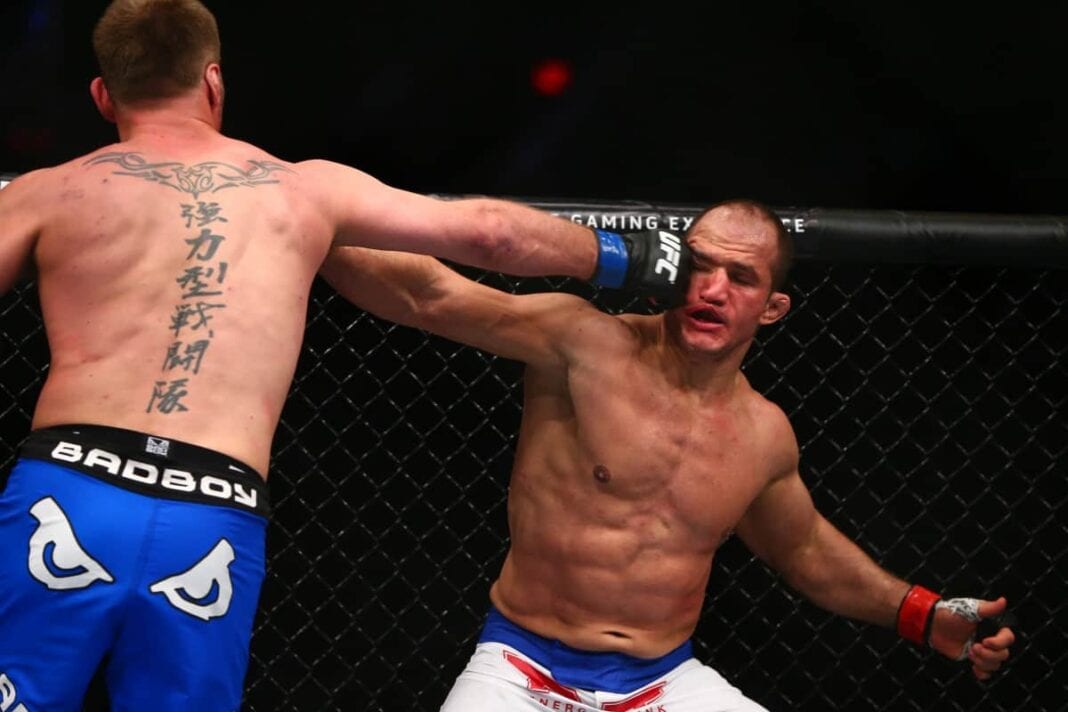 Two days after his highly controversial split decision victory over Stipe Miocic in the main event of Saturday’s (December 13, 2014) UFC on FOX 13, many MMA fans aren’t giving former heavyweight champion Junior dos Santos too much credit for the hard-fought win.

That’s because dos Santos came out the fight a bloody mess for the third time in his last four fights, a trend that’s created fear for his health after so many absolutely brutal wars.  Speaking after the bout, dos Santos isn’t among those worried about career longevity (quotes via Sherdog):

“I can go a very long [time], man. I really believe I’m gonna have a long career. It doesn’t matter too much. It’s part of the [game]. I get swollen very easy. It happens. I’m feeling OK, just swollen.

I believe I can win any fight. It doesn’t matter what happens during the fight, I will keep believing until the end of the fight.
It’s hard to understand sometimes, but I really believe I have a warrior heart.”

But UFC president Dana White isn’t so sure about the lasting effects of taking so many power punches to the head.  Although White agrees with the judges’ decision, he still thinks that dos Santos may be too tough for his own good and shouldn’t fight for quite awhile:

“That was the right decision. But let me tell you what: [dos Santos] slowed down a lot, he took some big shots tonight. His eye starts to swell up and his cheekbones start to swell up and that was early. If that was a three-round fight, Stipe wins that fight.

Junior got busted up early and the guy has so much heart. He just keeps coming. No matter what you hit this guy with, no matter how hard you hit him, he just keeps moving forward. He’s so hard to put away.

Where does this put him right now? I don’t know. Werdum is going to fight Cain Velasquez, and then we’ll see where we go from there. After the fight tonight… I‘m no doctor, but I don’t see Junior fighting anytime soon.”

That could be for the best for “Cigano,” who is drawing more criticism for absorbing so much damage than he is drawing credit for the pivotal win. In a sort of heavyweight no man’s land, there aren’t too many high-level bouts available for dos Santos other than a clash with Travis Browne.

He’ll have to heal up for a long time first, and the heavyweight landscape may or may not have changed by then. If it hasn’t and Velasquez remains champion, dos Santos will still be stuck in quicksand.

How much damage will he have to absorb on his quest towards another title shot?