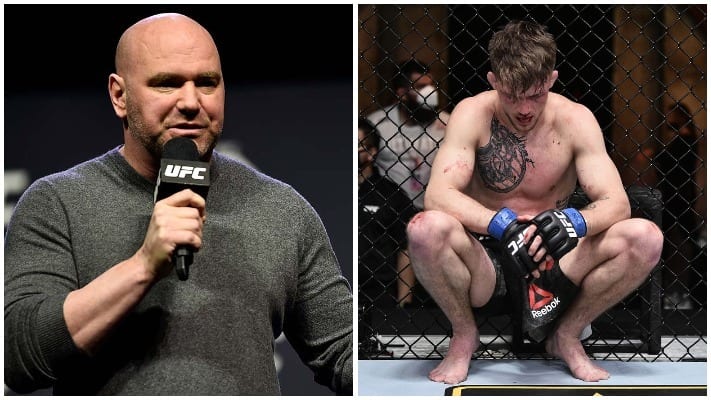 UFC president Dana White has vehemently defended Max Rohskopf who decided to quit on his stool between rounds last night. The UFC newcomer faced off against Austin Hubbard on the UFC on ESPN 11 preliminary card. After losing two rounds Rohskopf quit on his stool despite his corners best efforts to convince him to fight on – check out the video clip here.

Speaking post-fight at the event White defended Rohskopf quitting in his debut fight, he said.

“Let me tell you what: In this (expletive) sport, if you’re done, you’re done,” White told reporters, including MMA Junkie, at the post-fight news conference at the UFC Apex in Las Vegas. “You should absolutely be able to quit. I know that it’s frowned upon, but guess what? Anybody that would talk (expletive) about you quitting isn’t in there fighting. It’s real easy to be a critic. With what these kids do, this is a whole ‘nother level, man. … When you get here, this is a whole different level, man.”

“I believed back in the day that I was a fighter and wanted to do this and that, and one day I found out that I wasn’t,” White said. “The realization was that I wasn’t. When you find out, you need to walk away. I’m not saying that’s the case with this kid. But if that kid felt like he needed to quit tonight, who the (expletive) is anybody to judge him on that? He had the balls to come here and fight and take a short-notice fight in the UFC.”

“He’s gotta get up tomorrow and look himself in the mirror and figure out who he is and what he wants to do,” White said. “There is no shame in getting here and finding out that you’re not it. There’s no shame in that at all. He gave it a shot, didn’t work out. Anybody who would try to ridicule a kid like that, (expletive) you. Come try it. Come try and do what he did tonight. Very few people can do it.” (Transcribed by MMA Junkie)

Do you think Dana White is right to defend Max Rohskopf quitting during his UFC debut?