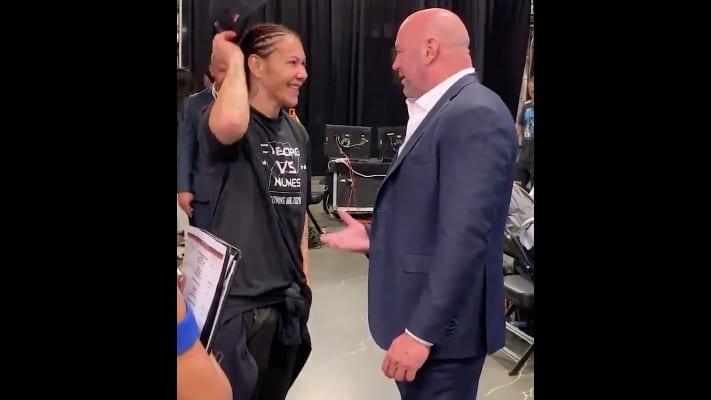 Cris Cyborg is making it known that she wants a second crack at Amanda Nunes.

Following her victory over Felicia Spencer at last night’s (Sat. July 27, 2019) UFC 240 pay-per-view (PPV), Cyborg was spotted backstage discussing the rematch with UFC President Dana White. The pair have been going back-and-forth with one another through the media for the past several months.

White claims Cyborg is scared to rematch Nunes, while Cyborg claims she texted White immediately after losing to “The Lioness” for a rematch. Check out the pair talking about making the rematch happen here:

Cyborg’s fight last night in Canada was the final on her UFC contract. It remains to be seen if the ultimately decides to stay with the Las Vegas-based promotion, or go elsewhere. One thing is clear, however, both Cyborg and the UFC seem interested in making the Nunes rematch. Perhaps a one-off deal can be worked out if a long-term deal isn’t reached.

Do you think the rematch between Nunes and Cyborg will take place?