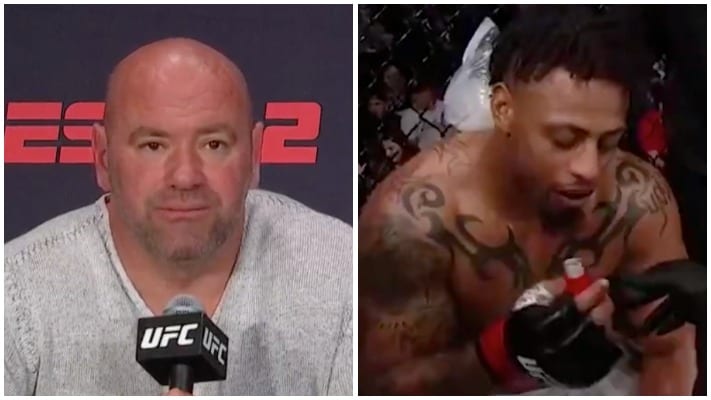 Dana White was left bemused by the events that had transpired in Greg Hardy’s fight with Ben Sosoli at UFC Boston.

Hardy used an inhaler in between the second and third round of his UFC Boston heavyweight encounter. He claimed it was approved by the United States Anti-Doping Agency.

However, the use of an inhaler is still illegal as the UFC announced afterward that his unanimous decision win would be overturned to a no contest.

So what were White’s thoughts?

“Yeah, it was crazy,” White said at the post-fight press conference. “…When the fight was over, I went over to [Greg Hardy’s coach] Din Thomas and said, ‘what the f*ck are you doing? How are you using an inhaler?’ And he said ‘the commissioner said we could.’

“What commissioner? When? So my team started to jump into it, try to figure out what happened, what was going on.”

Although White acknowledged that Hardy was given permission, he was particularly displeased with Thomas — who he is close friends with — for not knowing that an inhaler would be illegal:

“I don’t even know what to say,” he added. “First of all, Din Thomas. I mean, come on Din. You’ve been in this game forever. You know what I mean? His corner, they got to know you can’t use an inhaler in the corner.

“They should know that. It shouldn’t even be a question. You can drink water, gatorade in some states. I don’t know.”

What did you make of the inhaler incident?