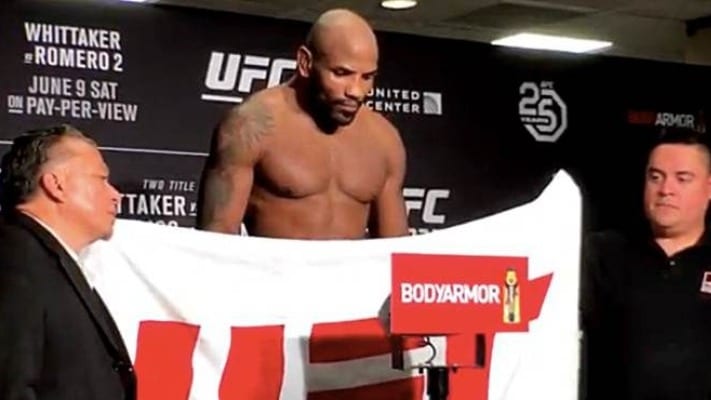 Yoel Romero went through one of the most disturbing weight cuts in recent mixed martial arts (MMA) memory back in June of last year.

The 42-year-old Cuban powerhouse missed weight for his UFC middleweight championship fight against Robert Whittaker at UFC 225. After missing weight, Romero could be seen grimacing in pain as he left back to his hotel room. Romero initially missed weight upon his first try but was given a second attempt after being cleared by doctors. Per the Illinois Athletic Commission rule, a fighter will receive two hours to make the weight on their second attempt.

However, Romero’s time was cut short for unexplained reasons. Romero only received about 30 minutes of the two hours. American Top Team (ATT) owner Dan Lambert tells LowKickMMA he believes it was so the commissioner could attend a Cubs game.

“I thought Yoel won that fight,” Lambert said. “I thought the score was terrible, I thought worst-case scenario you could have an argument that it was a draw. But I don’t think there’s any way he lost that fight. As far as making weight, when he got that fight, it was on relatively short notice and his foot was even in a walking boot.

“So the weight is concerning, but he certainly had a reason for it, plus there’s a long story about what happened with the commission. He was getting two hours to go make weight, they cut that short to 30 minutes because the commissioner wanted to go make a Cubs game that afternoon. So that was kind of a joke as well.”

Lambert detailed how Romero’s second attempt at making weight went down. “The Soldier Of God” rested a bit before jumping into a bath to resume his weight cut. However, just five minutes into his bath, the commissioner ordered Romero back downstairs to weigh-in, leaving about an hour and a half of his given time on the table. The commissioner threatened if Romero didn’t come down to weigh-in, he wouldn’t be fighting.

“It was one of the biggest crocks of sh*t I’ve ever seen in this business,” Lambert said. “Yoel went to the weigh-ins and he was a pound over. They give you two hours to make weight if the doctors deem that you’re physically fit enough and it’s safe for you to make the cut. They looked at him, they said, ‘Yup, he’s fine, go to your room.’ We went to the room, he had – I believe it was two hours to make the weight. So they said ‘Hey, no rush, we’ll chill out a bit and then take a little 15-minute bath, we’ll get under the covers for another 10 minutes, we’ll walk down and be fine.’

“And he had to get out of the bath, he had no time to extend his bath time, he had no time to sit under the sheets from the bath. Got up, walked downstairs, and what did he miss it by, a pound and a half or something? It was ridiculous. It wasn’t because the doctors said he could no longer continue. Then later, someone told me they saw the commissioner at the Cubs game that afternoon.

“They gave no explanation whatsoever as to why he wasn’t given the time he was supposed to be given to make the weight. And then they just said it was her decision, and then she’s at a Cubs game, so you do the math.”

Lambert was understandably furious about the entire situation, summing up the ordeal as “a f*cking joke.”

“It’s a f*cking joke,” Lambert said. “If the rules say, that you get two hours if you’re physically fit, then you get two hours. It’s not you get a half-hour, you get 37 minutes, you get 42 minutes. If they said it was only half an hour, he would’ve gone right into his room and jumped into the tub, then he should’ve made weight. So, he got a raw deal on that one.”

What do you think about Lambert saying he thinks Romero’s time was cut so the commissioner could attend the Cubs game?