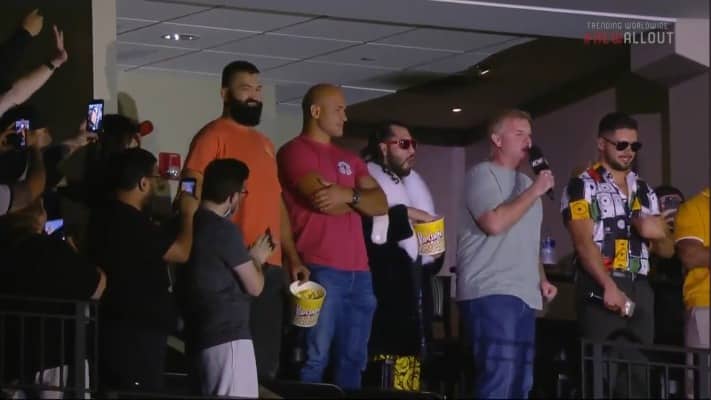 Dan Lambert was joined by Junior dos Santos, Andrei Arlovski and Jorge Masvidal as ATT made an appearance at AEW All Out over the weekend.

Lambert is the owner and founder of American Top Team, and also happens to be a huge professional wrestling fan. He has made a number of appearances at All Elite Wrestling events since it’s formation, showing some impressive skills on the mic. His latest appearance took place this Sunday, at the company’s biggest pay-per-view event of the year.

Accompanied by his fighters and AEW stars Ethan Page and Scorpio Sky, Lambert cut a promo hyping up the mixed martial artists and wrestlers, perhaps teasing a nearby collaboration.

While none of the ATT standouts Lambert has brought with him to AEW events have actually competed in the ring, it’s certainly helped them gain exposure and could potentially set them up for a new career once their MMA days are over. Arlovski and dos Santos both drew cheers, while Masvidal garnered the biggest reaction.

While all three men are still active in their MMA careers, they appeared to enjoy taking part in the event and could possibly make the transition later on. Appearing alongside Lambert certainly seemed to put their foot in the door.

All Out was a massive success for the fast-rising wrestling promotion. On top of a series of highly anticipated wrestling matches, it also saw the debut of a number of high-profile signings, including former WWE stars Ruby Soho (fka Ruby Riot), Bryan Danielson (fka Daniel Bryan), and Adam Cole.

AEW has continuously grown out their roster, and appear more than happy to take on some newcomers who can come in with same name value already behind them.

What did you think of Dan Lambert’s promo? Will we see any MMA fighters make the switch to pro wrestling?