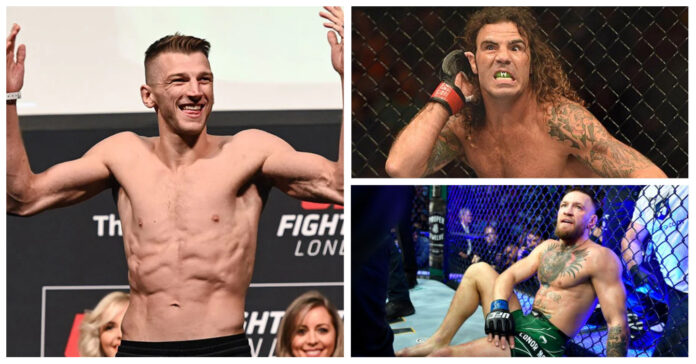 Dan Hooker shared a reaction to rumours of him being matched up with Clay Guida next.

As one of the more active fighters on the roster, Dan Hooker stayed on fight island last year to continue competing further when the UFC needed him, on a total of three occasions in 2021. Currently reeling off two consecutive losses to Islam Makhachev and Arnold Allen, Hooker has dropped four of his last five with a sole win coming over Nasrat Haqparast.

Following an unsuccessful switch back down to featherweight, ‘Hangman’ will be looking to return to action at 155 lbs in his next outing. He was initially linked to a possible showdown with Conor McGregor. ‘The Notorious’ has been on the sidelines for over a year in recovery from a broken leg and has not solidified a comeback date yet.

Hooker was then rumoured to face Clay Guida in his next bout although no official confirmation had been announced. In an interview with The All Star MMA, Hooker drew a comparison between the two opponents as he reacted to the gossip.

“I like the fight. I think Clay Guida is like an absolute G. I think it would be an honor to share the cage with him. Absolute no idea what they’re talking about. My manager called me and was like do you have any idea what this Clay Guida thing is. I was like no. I’ll do it, I’m keen, but I’m keen for any fight.” (h/t Sportskeeda)

Jorge Masvidal has been rallying for a shot at McGregor as well as the lightweight king Charles Oliveira. Michael Chandler also called out the Irish superstar and even offered to compete against him at 170 lbs. While no opponent has been confirmed yet, it likely will be once McGregor gets the green light to make his return.

Would you like to see Dan Hooker fight ‘The Notorious’ or Clay Guida next?