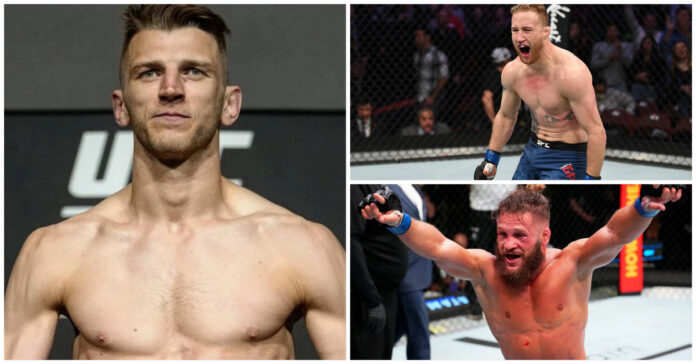 Dan Hooker has backed Rafael Fiziev to come out on top against Justin Gaethje.

This past weekend, rising prospect Rafael Fiziev took on former UFC lightweight champion Rafael dos Anjos in the headlining bout of UFC Vegas 58 in Las Vegas on July 9. In a close-fought battle up till the fifth round, Fiziev would manage to secure a quick knockout victory over dos Anjos in the opening seconds of the final round.

Following his win, “Ataman” expressed his interest in being paired up with former title challenger Justin Gaethje for his next outing.

In an interview with The AllStar, Dan Hooker talked about a potential fight between Justin Gaethje and Rafael Fiziev.

“Gaethje’s got very good footwork, very good coaching,” Hooker said. “That’s a true striking battle, right? Those are two of the best defensive wrestlers in the division. I don’t see either of them implementing a wrestling-style attack—obviously, Gaethje with the boxing and with the strikes, and Fiziev’s kicks.

“It’d be very difficult for Gaethje to get his hands going with those kicks going, I’d say. Gaethje’s footwork is very good so is Fiziev. Fiziev has a very good understanding of footwork. That’s a tough battle. If I had to right now gun to my head, I’d be putting money on Fiziev for that fight.”

Fiziev’s rise in the UFC

The 29-year-old Kyrgyzstan native is a proficient striker with a specialization in Muay Thai. Unlike other mixed martial artists, Fiziev is a coach at Tiger Muay Thai gym in Thailand, one of the most well-known training centers in the world. Numerous UFC athletes including Hooker spend time there as a part of their camp.

Fiziev has also displayed remarkable takedown defense in the promotion, second only to UFC welterweight king Kamaru Usman, before his latest bout.

Gaethje has already challenged for the title twice, once against Khabib Nurmagomedov, and the other against Charles Oliveira. A showdown with the human “Highlight” reel could up Fiziev’s standing in the division and get him closer to a shot at the gold.