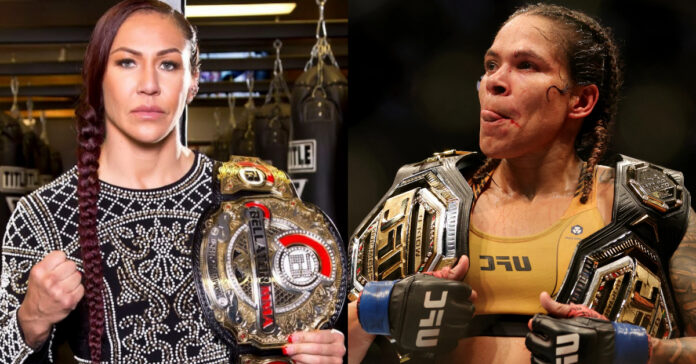 Cris Cyborg would be willing to take on Amanda Nunes in a rematch but only if she leaves the UFC.

Current Bellator women’s featherweight champion Cris Cyborg is widely regarded as one of the greatest female mixed martial artists of all time. She is one of the only athletes to hold a belt in the UFC, Invicta FC, Strikeforce, and Bellator.

She is coming off a successful boxing debut against Simone da Silva, a contest she won by unanimous decision last month.

In a recent interview with former two-division champion Henry Cejudo, Cris Cyborg talked about the possibility of taking on the reigning UFC women’s two-division queen. She made it clear what Nunes would need to do to make the second fight a reality.

“If Amanda Nunes gets out of the UFC, the rematch can happen,” Cyborg said (ht Middle Easy). “If she’s going to continue in UFC, it’s hard to happen. UFC don’t like to pay the fighters. Kayla Harrison wins in [the] same division, but I believe if fans would like to see this fight. We’re in different organizations. If it were to happen from a co-promotion [between Bellator and PFL], why can’t this fight happen?

“It can happen. Like Bellator doing RIZIN now. Fighters gonna go fight at the end of the year there in Japan.”

Two-weight boxing world champion and current undisputed lightweight champion Katie Taylor had recently called out Cyborg for a clash in the ring. Cyborg intends to level up in the sport and believes with enough hard work, she could compete with Taylor.

“I feel wonderful having my name there. I just started boxing. I know I did a lot of things in MMA, but for me it’s a dream. I’m gonna work real hard. For sure it’s not going to be easy, but I’m going to do my best.”