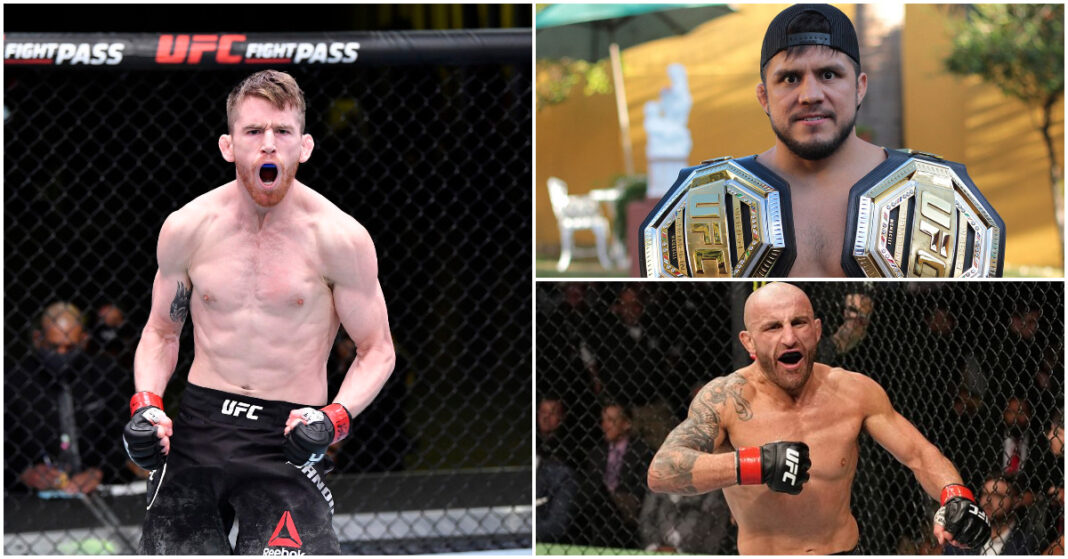 Cory Sandhagen would like to watch the return of Henry Cejudo inside the octagon against Alexander Volkanovski although he would prefer the Max Holloway trilogy fight first.

UFC bantamweight Cory Sandhagen competed against Petr Yan in his most recent outing last October. The fourth-ranked contender in the division was defeated by Yan by a unanimous decision to take home the interim title strap. ‘Sandman’ is reeling off two losses in a row, including one to T.J. Dillashaw by split decision last July. As he looks to get back on the winning ways, there had been no news on his next fight.

Another bantamweight athlete who has been looking to step inside the cage is Henry Cejudo, who retired in 2020 following a win over Dominick Cruz. The former two-division champ recently made his way back into the USADA testing pool to add fire to the burning speculation of whether he’ll come back and more importantly, against whom.

In an interview with LowKick MMA, Sandhagen was asked about his thoughts on Cejudo potentially fighting current UFC featherweight champion Alexander Volkanovski next and whether it will even happen or not.

“I kinda want to watch that fight, honestly. Henry talks so much sh*t that like, he’s, kinda hard not to want to watch either get beat up or beat the other person up,” Sandhagen said.

‘Sandman’ heaped praises on the ‘Triple C’ as he made the case for him to go up a weight class and face the champion, “That dude is one hell of a competitor and I kind of want to watch him fight Volkanovski. Who else is there to have a fight right now?”

On being probed about the likelihood of Cejudo getting back in the bantamweight division, Sandhagen said, “He could come back to our division too. I don’t know that he would get a title shot right away. I think that the more interesting fight is Volkanovski just because Volkanovski literally has no else to fight and our division is kind of stacked right now.

“Henry kinda wouldn’t be jumping the line at all if he went up to 145 and fought Volkanovski. I mean he would in a sense but I mean, there’s really no one else that has an argument right now.”

Alexander Volkanovski has cemented his position as a dominant champion lapping the division with multiple wins over top contenders. Max Holloway is a contender he’s beat twice. With a very competitive second fight, talks of a third contest between the two were imminent and scheduled for UFC 273 before Holloway was forced out of the bout due to an injury.

Talking about the ‘Blessed’ getting his trilogy fight over Cejudo’s title shot, Sandhagen said, “I’m going to take Holloway’s side over Henry’s (Cejudo) any day of the week.”

Cory Sandhagen is looking for an opponent himself as he revealed his plans to get back to action between June and August based on the talks his manager had with the promotion. Prior to his fight with Yan, his manager was informed by the promotion of a possible match-up with another top-five talent in the mix for title contention contingent on the results of the matches.

He’s aiming to ideally return in July or August and shared that the company hasn’t really given him any indication on his next opponent. With or without a competitor, Sandhagen is willing to take anyone on and would lean more for a match with Dominick Cruz solely due to his status in the sport. “He’s (Cruz) a part of MMA history, man and I want to be a part of MMA history too,” Sandhagen said.

Would you like to see Alexander Volkanovski face Henry Cejudo or Max Holloway next?