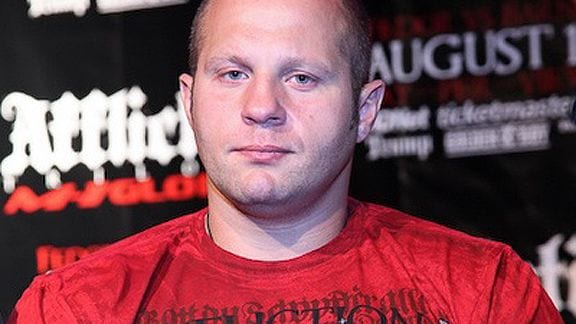 He got rid of Bellator’s long-held tournament format for a more traditional focus, and he also teased signing former UFC and current WWE champion Brock Lesnar by calling the hulking behemoth a “needle mover.”

Coker appeared on a recent episode of The MMA Hour to follow up on Lesnar, noting that there haven’t been any formal contract talks. However, if and when the time comes for Lesnar to return to MMA, Coker said that Bellator can afford him and will be at the forefront of negotiations:

“There hasn’t been any serious dialogue. But when the time comes to have serious dialogue, we’ll be right there. There’s not going to be a fighter on the planet we can’t afford and have access to.”

Coker sounds aggressive and confident in his pursuing of Lesnar, and it would obviously be a massive boost to the promotion’s status if he took the money and signed with Bellator.

But apparently Coker isn’t close to finished. The Bellator president told Sherdog Radio’s “Beatdown” that he is headed to Japan this New Year’s Eve for the annual Inoki Boom-Ba-Ye to meet up with retired heavyweight legend Fedor “The Last Emperor” Emelianenko:

Coker has experience working with Fedor in Strikeforce, so  he’s going to see if he could possibly get him to come out of retirement to fight in a Bellator cage:

“I’ve heard mixed signals. The last time I talked to [his people], they were basically saying he’s retired and he’s working for the government supporting MMA, the growth of MMA in Russia. I’m going to the New Year’s Eve show in Japan, so I’ll be over there and I’ll be talking to him and seeing if there’s any interest.”

Widely regarded as one of, if not the, best MMA fighters to ever grace a cage (or ring, as Fedor did), Emelianenko was actually less than stellar while with Coker’s Strikeforce from 2009-2011 after a once-promising deal with the UFC failed to materialize.

“The Last Emperor” had a 1-3 record with the Northern California-based promotion, defeating Brett Rogers with a thunderous knockout before losing to Fabricio Werdum by submission and both Antonio “Bigfoot” Silva and Dan Henderson by striking stoppage.

The loss to Werdum snapped Emelianenko’s momentous 10-year unbeaten streak and is still widely considered one of the biggest upsets in MMA history.

He was released by Strikeforce as they were bought by Zuffa, and went on to beat Satoshi Ishii, Jeff Monson, and Pedro Rizzo before announcing his official retirement from MMA competition in June 2012.

Years ago when UFC President Dana White unsuccessfully negotiated with Emelianenko’s M-1 Global management team, a bout between Fedor and Lesnar was undoubtedly the biggest possible pay-per-view (PPV) matchup that could have been signed at the time; a fight that was rumored for a football stadium in Dallas, Texas.

Ironically enough, it could now potentially become a reality, but in a Bellator cage. It’s an extreme long shot, because “The Last Emperor” seems content in his role promoting MMA in his beloved home of Russia.

Overall, however, the fact that Coker even has the vision to make the trip means that he’s looking to send the message that he’s not playing around with his new strategy heading into 2015.

The best chance Bellator has to compete with the UFC is by signing some big-name stars to create some must-watch events with mainstream attraction, and both Lesnar and Emelianenko obviously qualify.

Will Coker be able to pull off enough power plays to actually mix things up in MMA during 2015, or will the UFC’s dominance continue on, for better or for worse?