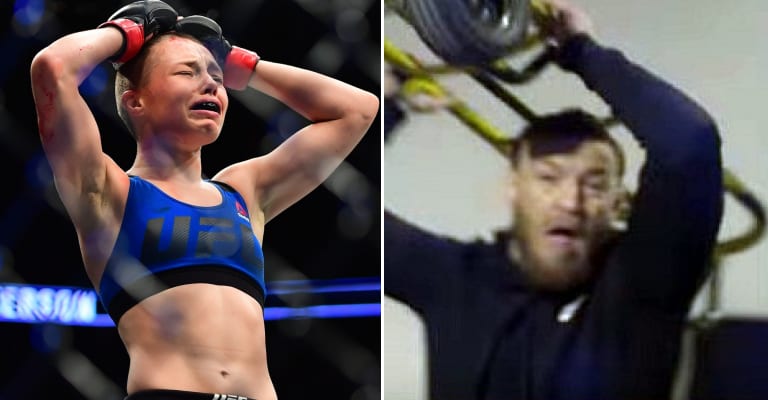 Conor McGregor may be returning at October’s UFC 229, but the effects of his April Brooklyn bus attack that left Rose Namajunas traumatized still resonate.

The UFC women’s strawweight champion almost didn’t participate in her rematch with former champ Joanna Jedrzejczyk at UFC 223. ‘Thug’ Rose was in the bus that McGregor attacked with a metal dolly and saw the chaos firsthand.

“”The Notorious” was aiming for his current rival Khabib Nurmagomedov, yet he ended up spraying broken glass onto other fighters. Ray Borg and Michael Chiesa were unable to fight due to injuries sustained.  Namajunas, however, may have been left with most lasting damage. The 115-pound champion reportedly suffered some severe anxiety.

“She doesn’t leave her house. It’s still there. She doesn’t go in public places. When you’re in a public place and there’s people everywhere, you’re going to be like ‘Oh my god, what could happen?’ Like if you’re involved in a 9/11 bombing, it’s gonna be hard to be in a city scenario. Every time you get in an elevator you’re gonna think of it.”

Wittman also called the UFC’s usage of the attack footage as promotional material as poor taste. There’s no doubt it will help sell the massive lightweight title fight between McGregor and Nurmagomedov at October 6’s UFC 229, but the fight was going to sell and sell big anyway.

Namajunas was able to overcome her fears and defend her title against Jedrzjczyk at UFC 223. Her problems appear to be lingering on far past that due to the sheer veracity of the attack.

The UFC women’s 115-pound champ does not have a fight scheduled as of this writing. If she’s unable to go out in public for the time being, it could be some time before we see her again.